Dragon Power NES Game Cartridge
Dragon Power was released for the NES in 1988. It was developed by Tose and published by Bandai. The game was supposed to be based on the Japanese anime Dragon Ball, but it was divorced from the licensing and renamed Dragon Power. This version of the game altered the sound, graphics, and Goku’s looks were changed to look more like American Kung Fu fighter stereotype. He was pictured on the box art wearing a blue headband and white gi. Master Roshi’s looks were changed to look like more of a traditional martial arts master. They also changed his fondness for women to having one for sandwiches, and especially for Bulma’s sandwiches. This was done for censoring scenes that were deemed inappropriate. Bulma was renamed Nora, Yamcha was renamed Lancer, Oolong was renamed Pudgy and is not referred as a pig anymore, with instead a kid, the Kamehameha was renamed Wind Wave, and the game’s Dragon Balls were renamed Crystal Balls.
The game starts with Nora and Goku on a journey to find all seven of the crystal balls. If all of the crystal balls are found, Dragon Emperor grants them a wish. This quest will not be easy since an army is looking for the two. Goku has the ability to attack, jump, or release the powerful move called Wind Wave to destroy his enemies. Most of the view will be overhead, with the view occasionally changing to the side view in some fights. There will also be power ups that will increase the player’s techniques and powers, letting some stronger abilities the player has flourish.
UPC: 0-45557-87310-3
Platform: NES
Players: 1
Condition: Used
Genre: Fighting
Region: NTSC (North America)
Rating: Everyone 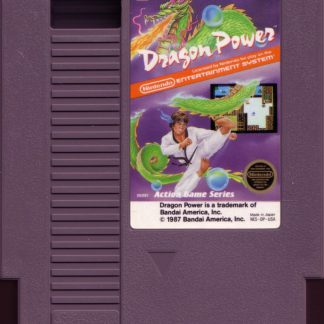