Tiger-Heli NES Game Cartridge
Tiger Heli was released for the NES in 1987. It was developed by Micronics and published by Acclaim. It was originally released for the arcade in 1985 and Toaplan developed it. It is the predecessor to the game Twin Cobra. The game will have four total stages, with each stage beginning on a helipad and ending on one. When the final stage is finished, the game restarts, but will be more difficult and start on stage two. Most areas in the game will contain objects that are unnecessary the player can destroy for extra points, like houses and oil drums. That was not characteristic of those type of games during that time period.
The player will take control of a helicopter and use it to destroy enemy hordes that will include artillery, battleships, and tanks. Though the game will take place in the air, there will be no airborne enemies throughout the whole game. The primary weapon the player will have is an infinite amount of missiles which are able to travel at maximum to the screen’s center. The player will also have two bombs that will destroy everything within a circular radius. However, enemy bullets can blow off these bombs. The player will be killed with a single hit and will re-spawn at a point about one entire screen length past the enemy or obstacle that destroyed them, thus the player actually slightly progresses. It will come at a cost though.
Three lives will be given to the player when the game starts, with bonus lives being awarded when they accumulate 20,000 points, and then every 80,000 afterwards. There will be flashing crosses that are scattered through every level will award a player a power up, and will depend on the cross’s color on what power up they get. The red cross will give a player a mini helicopter that will fire from the side perpendicular to their helicopter. The white cross will give the player a mini helicopter that will fire forward. The player will be able to mix and match these mini helicopters, but cannot have more than two at once. A green cross awards a player with another bomb as long as they do not have two. Getting a power up when it is not necessary will give the player 5,000 points.
UPC: 0-21481-10203-8
Platform: NES
Players: 1-2
Condition: Used
Genre: Shooter
Regiion: NTSC (North America)
Rating: Everyone 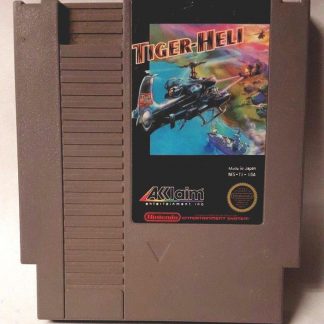