View cart “Werewolf NES” has been added to your cart.

Werewolf NES Game Cartridge
Werewolf: The Last Warrior was released for the NES in 1990. It was developed by SAS Sakata and published by Data East. The game begins on a colony planet called Red Earth, which was Earth’s second. A Dr named Faryan traversed inside a cave, eventually waking up an evil that was ancient, turning himself evil in the process. Dr Faryan later created a hoard of mutants that end up imprisoning almost everyone on planet Earth. Humanity’s only hope was a man with the name Ken that had the capability of transforming into the werewolf called Warwolf.
The player will begin the game as a human. In this form, the player can move, jump, punch, and shoot a shot that can be powered up which will move across the game screen horizontally. Whenever the player find a W icon that is red, they will transform into Warwolf. If a W icon that is blue is grabbed accidentally, the player will be transformed back into a human. The player will also go back to human form if too much of their energy is lost. As the werewolf, the player will be able to jump higher, move faster, have more strength, have an attack that sends a shockwave, and will have a wall climbing ability.
Additionally, the player as the werewolf will have a meter used to show their anger which can be filled up when orbs are collected. When 5 orbs are collected, the player will transform into am extremely powerful Super Werewolf that will be even stronger, move even faster, and have partial invincibility. The game will have a total of 5 stages with every stage having a boss that will move in a pattern that is distinct.
UPC: 0-13252-00219-7
Platform: NES
Players: 1
Condition: Used
Genre: Platformer
Region: NTSC (North America)
Rating: Everyone 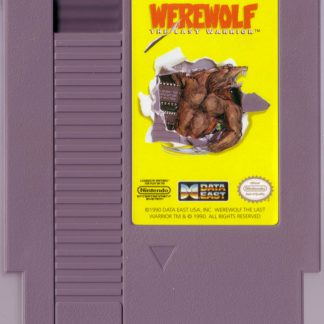