Pac-Man 2 SNES Game Cartridge
Pac-Man 2: The New Adventures was released for the SNES in 1994. It was developed and published by Namco. Instead of the maze game the first installment was, this game will incorporate point and click game elements. Certain elements and its structure were borrowed from the game Pac-Land. It also has some elements from the cartoon series like his family and the ghosts being commanded by the main villain. The story will unfold as a connected series that is loose of misadventures that stem from the quest of Pac-Man completing tasks while the mysterious leader and the ghosts plot on destroying him.
The game will have some key differences that will set it apart from the other games apart of this genre. One of them is while most of these type of games has the player interact with an environment using a variety of commands, there will not be direct control of Pac-Man who will move and interact with the game world, characters, and the player sometimes, mostly by himself. There is only one command that the player can give and that is Look, which will have Pac-Man turn or look in whatever direction is being held on the SNES controller. The player’s main role is being an observer and instead of interacting with the game world directly by clicking the interface, they will have a slingshot to be used for indirectly affecting or striking objects in Pac-Man’s world. This will include Pac-Man himself.
The puzzles will depart from a standard inventory mold, physics puzzles, and logic that is typical in most games of this genre. The solutions for the puzzles will depend often on the management of Pac-Man’s different moods. His mood will change according to what he will encounter in the current environment or what actions the player will take. An example is if the player shoots an apple down so Pac-Man can eat it, he will become happier, though shooting his head will gradually make him angry. There will be other moods like fear and sadness, all having various intensities. If Pac-Man becomes too happy, he will start to smug which will make him braver. This also makes him less cooperative and more rude. Though the negative moods will often make the player’s progression harder and be hard to change the negative mood, sometimes a negative mood is needed for progressing the game.
During the game, Clyde, Pinky, Blinky, and Inky, the ghosts seen in other Pac-Man games, will occasionally harass Pac-Man. When encountering them, he will become paralyzed with fear and will eventually faint. If a power pellet is fed to Pac-Man, he becomes Super Pac-Man shortly and will fly across the game screen and eat any ghost that he sees. Some cases will have a ghost guarding an important object that is needed for progressing.
On top of the game’s normal gameplay, there will be specific sections in the game where Pac-Man will ride in a mine cart or hang glider. The player during these sections will need to keep him from colliding into ghosts or objects. These parts and others will be focused more on the reflexes and action and will require using the slingshot well for keeping Pac-Man from dying.
UPC: 0-22674-02029-0
Platform: SNES
Players: 1
Condition: Used
Genre: Action and Adventure
Region: NTSC (North America)
Rating: Everyone 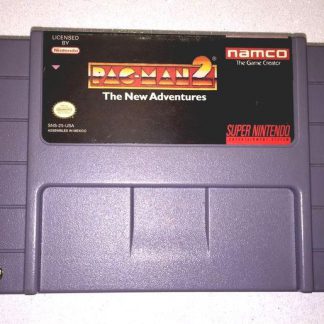