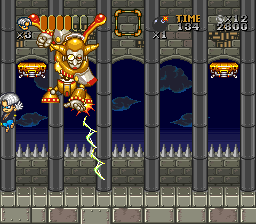 Next to shooters platformers are some of the easiest games to import as any semblance of a story is merely window dressing to get you into the game. With platformers being the de facto genre of choice during the early 90s it’s hard to believe a few slipped through the cracks. The Go Go Ackman series range from really good to excellent and I’m sure if the manga had been localized these games would have come over too. That doesn’t matter however as the games are easily enjoyable with no Japanese knowledge and the first is a perfect introduction.

Anyone familiar with Dragon Ball will recognize the similarity to Trunks. Remove his nose and give him elf ears and you have a new character. Their personalities are pretty close too as both characters are mischievous except Ackman takes it a step further by actually killing people for their souls. That plot point forms the basis for the game’s story. The angel Tenshi has hatched another plot to kill his rival Ackman and enlists the aid of a higher angel to stop him once and for all. The interplay between Ackman and Tenshi is a bit looney tunes and despite the dark undertone the adventure is still pretty comical. It’s pretty hilarious to see Tenshi try his hardest and fail all the while Ackman is either oblivious or too stupid to notice. That tone helps an already pretty good game stand out.

It’s actually pretty surprising how much mileage Banpresto got out of Go Go Ackman. There are three Super Famicom games loosely based on what is essentially a one volume manga. That isn’t a slight against them and more of a testament to how good the premise for the series is. Collecting souls for the devil is some pretty dark stuff but here it is played for laughs. That cheeky tone is kept in this first video game adaptation as it sticks closer to the manga. While it’s understandable why it wasn’t released worldwide it doesn’t matter as no Japanese is required to enjoy this solid platformer.

Ackman is a pretty nimble protagonist and relies on fisticuffs to get through tight situations. Aside from punches and kicks he can wind up a punch and throw a mean sonic boom. Even the staple butt bounce makes an appearance except here it dazes enemies, allowing you to kick them into others. What’s funny to me about all this is that he has a sword strapped to his back but can’t use it or any other weapons until collecting an item. Part of that would be just how overpowered they are. Most enemies die in a single hit but the reach the boomerang, sword, and gun give will allow you to breeze through the game. I can understand limiting it in that regard but it still feels pretty cheap.

The game has all the trappings of your typical platformer such as collecting 100 coins for extra lives except here you have a little demon helper that will pick them up for you. The level design is great all around with a great deal of variety throughout. There are frequent forced scrolling segments that are actually fun as most hazards are telegraphed well in advance. Boss battles are frequent and unique if a bit simple. Their goofy designs make up for it however as this skews closer to the Dr. Slump side of Toriyama rather than Dragon Ball.

Overall the game is not too challenging and is a bit too easy. Despite beginning with a small life bar you’ll find hearts all around and will rarely be close to death. The bosses have easily recognizable patterns and if you manage to hold onto a weapon when you reach them the encounter is trivial. There is a slight ramp up toward the end but nothing too notable. The game is of medium length but the alternate paths do provide some impetus for playing through it twice at least.

Go Go Ackman is a great looking game, fitting as it was released in late 1994. Akira Toriyama’s distinctive art style easily translates to video games and is replicated here in the sprite design. The game’s colorful cast of characters are pulled from everywhere; since the game doesn’t take place in any set period they can throw in everything. There are demons, robots, hitmen, and the undead and yet it all makes sense. The backgrounds are especially pretty with up to 3 or 4 layers of scrolling giving them some depth. The music is good but not noteworthy; there were only one or two songs that caught my attention but I’d rather that than generic rock that tries too hard.

For its first video game outing Go Go Ackman is solidly entertaining. It hits all the right beats and provides a decent challenge for any level of platforming fan. The story is completely inconsequential so you shouldn’t fear importing. For those that want to experience the game in whole there is an English translation patch. Either way this is one of the better import only platformers for the system and it only got better as the series progressed.