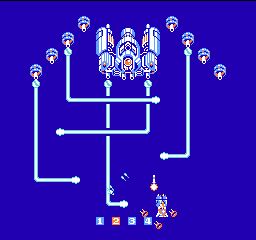 I was always surprised that Irem never produced an NES port of R-Type. The NES/Famicom basically ruled the world at that point and it would make sense to bring your hottest property onto the best-selling console of the day but it never happened. While the Master System and Turbo Grafx-16 ports were well done those platforms were not exactly thriving. Instead we were given ports of obscure games like Image Fight. Not to completely disparage the game but Image Fight is little consolation for R-Type; it’s a decent game but with plenty of other quality shooters available there is little reason to bother with it.

You have a choice between two pods: the blue pods only fire forward, creating a concentrated burst of shots that is more destructive. The red pods follow the direction of the ship. It can be tricky to direct them in a pinch but it is far more versatile. You can have up to three, with two at your side and one at your back. By pressing both buttons together the pods can be sent out as a weapon though it isn’t particularly strong. Weapon selection is kept pretty light, not that the game needed any more than what is provided. There’s the V-cannon which follows its namesake and is near useless, seeking lasers that target the closest enemy in a straight line, a piercing laser, reflecting shot, and homing missiles. These attach to the front of your ship and can function as a one-time shield. Annoyingly you have to destroy your current weapon to grab a new one which is just plain stupid.

Image Fight is one of the few NES shooters that allow you to control the speed of the ship. Speed can be changed up to four levels which makes the ship faster and more maneuverable. It’s a decent option but outside of one boss encounter I never bothered with it and even forgot it could be controlled.

The game is broken up into two parts. The initial five levels are a sort of simulation or test and you are graded on your performance. Score less than 90% at the end and you have to do it all over. If you pass then it’s on to the final three “real missions”. In the arcade achieving a passing score was a grueling ordeal but here the game has been so simplified you would have to be brain dead to fail. The last three real missions are only a slight step up in difficulty, leaving the whole affair a sedate experience from beginning to end.

While a game leaning on the easy side isn’t so bad perhaps Image Fight’s biggest sin is the complete lack of excitement. This is an incredibly slow paced game and while there isn’t anything wrong with that when done well this is anything but. You will rarely be attacked by more than two or three enemies at a time, with plenty of time and room to dodge their fire. Even the bigger space ships pose little threat as their turrets are easily destroyed. The few weapons available are massively overpowered in comparison leaving you with to spend large amounts of time waiting for something to spawn.

One weapon in particular is game breaking: the homing missiles. Once you’ve acquired these you can literally park your ship on one side of the screen and let them do all the work. While they will occasionally try to follow an enemy behind a wall it is easy to get around that and utterly decimate the end level bosses in seconds. Even the last three “real missions” are no match for the homing missiles. True, you can always opt for a different weapon and option combo but realistically who gimps themselves on purpose to look for a challenge?

Compared to its arcade big brother the NES version of Image Fight is the definition of a cheap port. Entire backgrounds have been removed, leaving a flat black backdrop in its place. It is incredibly boring to look at and was certainly not done for technical reasons as even earlier 1985 releases like 1942 and Zanac look better. The system is capable of better. The one positive I guess is that the larger ships and such have an extremely “clean” look to them that stands out against the backgrounds but you can tell I’m struggling to say something positive.

Image Fight is a strictly average shooter that maybe would have stood out had it been released years earlier. But by 1990 games like Gradius 2 and Parodius were pushing the system hard, making the complete lack of effort here more pronounced. There’s literally no reason to bother with this game.