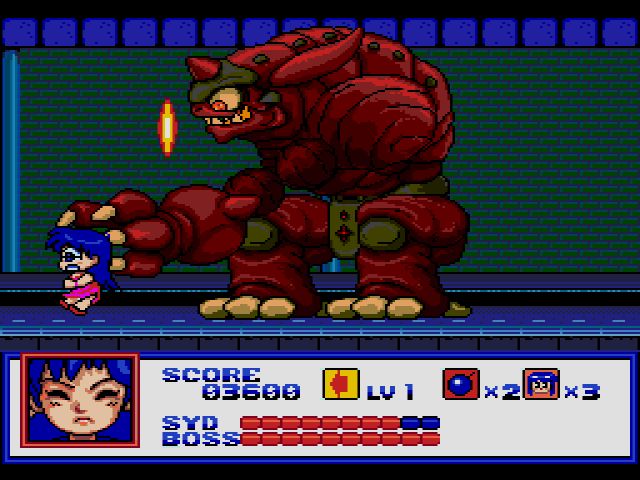 I’ve never understood the appeal of the whole super deformed thing. I get the whole “cute” angle of it but aside from the novelty of seeing chibi renditions of your fan favorite characters (as SD is usually applied to popular properties) it does nothing for gameplay. The only time I guess it added any benefit to a game would be Super Puzzle Fighter. Syd of Valis is one of the few SD games to reach America and is a prime example of what I mentioned. Aside from the cute graphical overhaul this is simply a bad version of an already middling game.

The name Syd of Valis might lead you to believe that this is a new installment in Renovation’s series when in actuality it is a repurposed port of Valis II. The name is unfortunately a localization error; apparently the staff at Renovation thought Syd sounded close enough to “SD” that they chose to rename the game, completing defeating the purpose of its original name. That wouldn’t be so bad if they also hadn’t changed Yuko’s name to Syd as well. As an unintentionally funny port of Valis II this port opened the game up to a larger audience as there weren’t many who owned a Turbo CD. It’s admirable but would have been better appreciated if it fixed the flaws of the original game rather than adding even more of its own.

The graphics, while stylized, are an improvement on the original. All of the character sprites have undergone a cuddly makeover with large eyes and over the top expressions when hit. The big head/small body look is not to everyone’s tastes however it looks good here, especially since the sprites are so large.  This is most evident with the bosses. The backgrounds have at least one layer of scrolling in comparison to the flat backdrops of its Turbo Grafx counterpart. Unfortunately the long cutscenes and extensive voice acting were lost in the process but given the game’s look I don’t even want to imagine how those would have turned out.

What little story remains in the game has been butchered pretty heavily which is just sad. For a game with so little text the fact that it has been mangled is simply baffling. The series followed anime tropes through and through but the fact that there were extended cutscenes at all at least provided some impetus to continue through the average gameplay. There are spelling errors and repeated dialogue throughout the game which shows just how little care was put into this package. It’s doubly disappointing as Renovation at least did a solid job with all of the other installments in the series.

Where the story and such have taken a large step back Yuko remains largely unchanged. Yuko moves at a brisk pace but also slides around a bit due to the bad physics. The slide attack is gone but in its place is a very useful double jump although platforming isn’t called on too frequently. You can also attack upwards which doesn’t sound like much but is a big deal considering the number of flying enemies and bosses in the game.

One noticeable improvement in the gameplay department would be the inventory of armor and weapons brought over from the MSX and PC88 originals. The different suits of armor modify your base defense, attack power, and speed with very tangible results although to be honest I stuck with the basic Valis suit until I received the ultimate armor with no major impact on my progress. They’ve even added an exclusive Chinese dress for some creepy fan service. The three additional weapons are earned at set points and can be switched at any time. There is some strategy to using the appropriate weapon to trivialize a boss encounter (usually the three-way shot) and the game does a good job keeping even the basic fireball you start with relevant by making it the most powerful.

In all other respects however the game has been overly simplified. While the levels are largely based on the originals they have been streamlined; gone are the separate paths through most stages as well as nooks that hid items. Most stages are a simple straight path and incredibly short. Were it not for the game’s sloppy physics and insane difficulty at times I wager most would finish the game in thirty minutes or less. Speaking of difficulty the game has notable spikes that will make you wonder what the hell just happened. Nearly all of the bosses hit hard and fast with some possessing attacks that are almost impossible to judge. The first boss moves so quick I honestly thought you were supposed to lose! Later bosses have two or three forms that require near perfect execution to defeat. In all other respects however the game is simple with frequent life restoring hearts and weaker midlevel bosses that refill your life bar after death.

Syd of Valis is a different take on a classic game but that doesn’t make it good. The myriad number of problems, from its ridiculous challenge, sliding physics, and boring level design make it an average game in a library full of far better titles in the same genre. There is no reason to ever bother with this subpar effort.