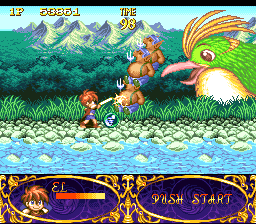 Side scrolling beat em ups were at the height of their popularity in the early 90s with every console not named the Turbo Grafx-16 receiving their fair share. While the SNES had a solid lineup of brawlers some of its best were left behind in Japan such as Undercover Cops and Iron Commando. Melfand Stories is not as good as the previously mentioned games but certainly has its merits. Ascii could certainly have done worse than bringing this out worldwide but as it is no Japanese knowledge is required to enjoy this solid romp.

In the land of Melfand the King was kind and fair to all. However his subordinate Nomolwa decides he should rule instead and makes a bargain with the demon Beril to usurp the King. With this Nomolwa overthrows both the King and Queen and terror reigns. All hope of restoring peace lies with four warriors, each wanting to take down Nomolwa for their own reasons.

Each hero has their specialty and falls neatly within established tropes. The young El is the typical well rounder, jack of all trades but master of none. Corse is physically the strongest and has the highest defense but is also the slowest. Lemin has the longest range with her fireballs but is also the weakest. Technically her magic is the most powerful but I would be hard pressed to note any differences between her spells and the rest of the crew. Nora is the most interesting. With her long whip and high jump if played correctly she is game breaking since you can use hit and run tactics against even the toughest bosses.

The game confines its action to a single plane which might seem strange as it goes against genre standards but largely works here. These aren’t so much levels as they are short vignettes that have a few enemies and a boss encounter before moving on to the next set piece. It certainly works to keep up the visual variety but doesn’t exactly make for a fulfilling experience. After almost every stage you have a choice between two levels, usually designated as easy or hard. It’s actually pretty cool and is incentive to play the game more than once.

Overall however the game is incredibly simple which is to its detriment. It has nothing to do with its single plane; the Ninja Warriors is similar and that game is awesome. In terms of attacks you are limited to a simple three hit combo, a defensive maneuver or shield, and magic. Even by beat em standards that is pathetic. To some degree it almost seems like the designers were aware of this as the game moves at a brisk pace, never lingering in one area too long before moving on to a new change of scenery. That is a point in the game’s favor but it also highlights its crucial flaw.

Like most brawlers Melfand Stories is short however like Star Fox has more than one path to its conclusion. There are nine levels in total but on any given run you’ll only see five. There are three paths to the end and in addition each character has their own individual ending. While it sounds like a lot of content a single play through of the game ranges from thirty to forty five minutes depending on whether you suck at videogames. Disappointing for sure but at least in this regard it fares better than most games in the genre.

This is a pretty easy game overall due largely in part to how short the levels are. Despite each stage being split into multiple smaller segments they are brief with only a few enemy encounters before facing a midlevel boss. Health power-ups as well as magic are also plentiful which I found odd; usually these are spaced out better. You only get one life and limited credits but it is easy to gain more through points. Since you respawn when continuing and can even change characters bum rushing a boss is a valid strategy. Having said that for some reason it “feels” just right although I do wish the levels were longer.

Melfand Stories is a pretty attractive game for a title that has very little notoriety. The sprites are medium sized and stylized; not quite super deformed but also not chasing realism. The game’s vibrant color palette and world design is just incredibly charming. It’s definitely unique and an acquired taste. The levels run the typical fantasy tropes but even so are still unique even compared to something like King of Dragons. The one area that is lacking would be the animation; for such oddly proportioned sprites the animation can look robotic at times. But that is a minor point when viewed as a whole.

While it isn’t the greatest beat em up there’s still plenty to like about Melfand Stories. This really should have had a western release but even so you are only missing out on minor story bits here and there. Fans of brawlers and Super Famicom imports will find a solid game behind the simplicity of its gameplay.