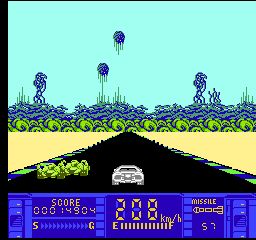 While I have a great deal of nostalgia for 8-bit games of all stripes racing games are the hardest to go back to. The march of technology has left the vast majority of these games lacking and while I can still appreciate Excitebike I’d just as soon rather play something more modern. Square’s Rad Racer is one of the few games from that period I can revisit and there were a few other games in that style. Astro Fang is dangerously similar to Rad Racer but adds a few cool twists that at least makes it somewhat unique. It won’t win any points for originality but it remains a solid game that never left Japan.

If you can actually believe there is something of a plot. A series of natural disasters has left the planet RS-121 a devastated wasteland. However amidst the destruction lies a singular path, the Black Line. An unsolved legend lies at the end of the Black Line and Raiba has decided to put the legend to the test in his souped up Astro Fang. I never said it was a good plot.

Upon first glance you can’t help but note the eerie similarity to Rad Racer. Whether it was intentional or not the two games would look near identical were it not for Astro Fang’s intergalactic setting. While the two games share a graphical style gameplay wise there are some distinct differences. The controls aren’t as tight as this doesn’t have the same level of physics (I can’t believe I’m saying that about an 8-bit game) but at least they are serviceable. By pressing down you can compact your car ideally to squeeze between tight spaces but I can honestly say anytime I’ve successfully done so was a happy accident.

Racing is less of a focus as this more of a battle racer in the style of Chase HQ. There are numerous weapons available from the shops in each track to destroy drone cars and the end level bosses. Missiles, tire spikes, and even invincibility will send these hapless idiots up in a blaze of smoke. Aside from missiles these power-ups last until your first wreck of if you bump into a few too many enemies. Most of these weapons are so powerful they would be game breaking if the tracks weren’t so long which balances it out. Using weapons is not to beat any sort of strict time limit but mainly to avoid running out of gas.

Unlike most arcade style racing games there is no timer winding down as you drive however fuel is limited and more or less serves the same function. Occasionally you’ll find a quick refill along the track but for the most part you’ll need to duck into the shop at every opportunity to buy some more. Study the pre-level map since you don’t want to miss a shop by choosing the wrong branching path. As you progress deeper into the game shops are spaced out even further which forces you to make as few mistakes as possible or else its game over. At least there are unlimited continues.

Despite that slight change the game is no less punishing. Totaling your car as in Rad Racer will cost a unit of fuel and it quickly adds up. Just like that game towards the end there is very little room for error and it is soul crushing to have to start over right at the tail end of a course. The game follows along the same lines as Square’s classic as there frequently three rival cars occupying each lane and it is easy to get thrown into trackside objects. While you can (and should) blast them you do have to conserve missiles otherwise you can’t defeat the end level boss. The game can be incredibly difficult and unfair with its propensity to place objects at random points in the road with no prior warning. Although there are only 6 levels they are incredibly long and some will probably take a few tries to complete.

With its alien worlds and abstract car design Astro Fang is a long ways from the coastal beaches and city lights of Rad Racer and is better for it. The various extraterrestrial planets allow the designers to go wild and create truly weird and abstract backdrops to race against. My only gripe visually is that some of the best vistas are only seen for a second or two as you transition along your chosen path. The music is not as good however. There are a few catchy tunes but anytime you buy a weapon of some sort they come with their own theme song that is just, meh.

All in all while Astro Fang is a bit derivative for its time there was very little else like it. All of its features do not come together properly but what is left is a solid yet repetitive game.