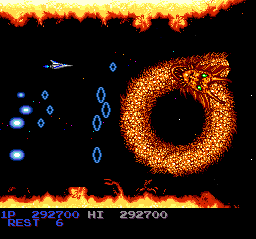 Any fan of NES shooters is undoubtedly familiar with Life Force. As the sequel to Gradius we all thought the game was excellent, building on what we loved about Gradius and more. However what nearly all of us were not aware of is that Life Force was actually a loose port of Salamander, an entirely different series from Konami. Salamander would see many ports and sadly the excellent PC Engine version never came to the US. This is an excellent addition to the system’s shmup library and one worth seeking out.

Those who have played Life Force will be pretty surprised at just how different Salamander really is from that game. For one there is no power-up bar; all weapons are dropped randomly from enemies. I can see why Konami adapted the Gradius weapon bar when bringing the game to the US as it drew an automatic connection to Gradius but the Salamander method is actually pretty quick. Item drops are a regular occurrence although you’ll have to remember what each weapon looks like to avoid ditching the laser for the ripple for example.

As a shooter Salamander mixes both horizontal and vertical scrolling much like some of the Twinbee games. This could have been a recipe for disaster but the game is equally adept at both. It’s interesting to note some of the other differences between this and Life Force. Where Life Force adapted a biological theme Salamander is more straightforward (although all of these changes would be incorporated into a new version of the arcade game too). The fourth stage of Salamander was moved up to become the second level of Life Force. Sadly the original stages of Life Force aren’t present, which sucks. While they definitely seemed out of place (seriously an Egyptian themed level?) their presence would have increased the length of the game and made you feel like you got your money’s worth.

Overall the difficulty is quite low compared to the typical entries in the series. Due to the frequent weapon drops you can reach full power pretty quickly at which point you will blitz through the levels easily. There is still a ton going on with stray bullets and enemies blending into the background but nothing so intense that would be considered unfair. This home port adapts the checkpoint system of Gradius but isn’t as punishing since the game is so generous with weapons. There is no Konami code and continues are limited but that is little deterrent. The lacking challenge does however highlight the one crucial flaw with the game however.

The only major flaw with the game is its length. With just six stages shooter veterans can complete the game in under thirty minutes. Those less skilled will probably average an hour or so and while I like the game there is still something to be said about its value proposition. On the plus side the game is relatively cheap by import standards and I’m sure most will run through the game a few times as it is pretty awesome.

Salamander was a significant leap forward in terms of presentation over Gradius which is surprising considering both games were released a year apart. The generic star fields of old have been replaced with more varied terrain such as fortified enemy bases, asteroid fields, and fiery planets. There is also a unique boss for every level which sounds minor but goes a long way toward keeping you from getting bored. I’m pretty confident no one wanted to spend another game blowing up the same mothership over and over again. This version of the game is near identical outside of differences in resolution and some minor loss of background detail. The FM synthesized music has been improved over the arcade game but the voices announcing the names of weapons and levels have been removed.

The one flaw with the game’s presentation is the slowdown. Much like the NES version of Gradius II with four options and a weapon like the Ripple filling up the majority of the screen the game can and will slow to a crawl frequently. This is especially egregious during boss battles but at least there it is welcome as the game can move too fast otherwise. How’s that for a problem? It isn’t game breaking but is pretty annoying as it really stands out amid the rest of this fantastic package.

Outside of the Salamander Deluxe Packs for the PlayStation and Saturn this is the best port of Salamander and one that should have made it overseas. If the game’s length is not an issue for you I see no reason not jump in unless you have access to the previously mentioned Deluxe Packs.