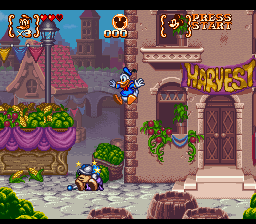 Looking back it sucks that Capcom took such a huge bath on the console ports of Super Street Fighter 2 and as such began to cut back on their cartridge based titles as we missed out on a few cool games. If you would have told me at any point in the 90s that a Mega Man would not be released worldwide I’d have called you crazy. Yet Rockman & Forte would take 7 years and a new platform to come to the US. The Magical Quest series was hugely popular and excellent even though they targeted the younger set. Unbeknownst to most a third game in the series hit Japan exclusively in 1995 and while it isn’t as refined as the first two is still a pretty damn good game.

It seems Donald Duck’s legendary bad temper has caused more trouble than necessary this time around. After losing his composure over falling to one of Huey, Dewey, and Louie’s pranks the boys hide in the attic to get away from him. However there they find a magical book and are sucked in to Storybook land by King Pete. When Mickey and Donald come looking for the boys they are informed by the fairy of Storybook land that they will need to overthrow King Pete to get the boys back.

Either Mickey or Donald are selectable and this time around the choice is more than cosmetic. Both characters can grab and throw objects in their base form as well as butt bounce but their costumes differ in functionality. Mickey dons a full suit of armor, complete with a shield to block attacks and a lance that can attack in multiple directions. Donald’s large ass (the game’s words not mine) means he can’t wear armor. Instead he dons a cheap barrel with a hammer. However the barrel is pretty awesome as it can float in water and be used as protection from most hits. The magic suit has the same differences: as Mickey’s magic birds fly instantly whereas Donald has to charge his magic first.

With their unique abilities comes a slight change in level design as both characters will at times take different paths. Since Mickey will drop like a stone in water when armored the bottom half of the Harvest Festival is not a good choice for him. This aspect of the game isn’t taken as far as it could have been however. If every level had separate paths for Mickey and Donald it would have been a good reason to play through the game twice. In coop you can throw each other around, perfect for finding hidden items. But once you’ve played World of Illusion, which has entire levels designed exclusively for two players you’ll want more from this.

While the game largely has the same feel as the two previous games the controls are not as responsive and the costumes are a bit of a retread. The frustrating controls are most prominent with the climbing suit. For the most part they’ll automatically grab any tree or pillar than can be ascended however performing an accelerated jump to another pole or ledge seems to randomly work and unfortunately this skill is mandatory in the final levels. As far as the costumes go the climbing suit is a slower and less responsive version of the Mountaineer costume from Magical Quest and the magic suit is a less versatile version of the magic turban.

Where the general gameplay is largely the same as its predecessors some of the same criticism can also be lobbied at this game. Once again the quest is incredibly easy, with life restoring hearts and extra lives in ready supply. If you find one of the bonus rooms you can potentially stay there and accumulate items as long as you don’t pick a Pete card that throws you out. The majority of your deaths will come from dealing with the odd control quirks surrounding some of the suits. Boss battles can be tough but by the midpoint of the game they are literally tossing out extra lives in pairs. Despite being one level longer than the prior entries this still feels just as short which sucks as it is still enjoyable game regardless of its few flaws.

The Magical Quest series has always featured exceptional artwork and this installment is no less impressive. The backgrounds are gorgeous and the game still features the same wide range of animations for literally every enemy. This is not a huge leap over its predecessors as it is obvious that Capcom are reusing the same engine however the art direction and variety in environments are what carries it. The soundtrack this time around is sadly not as memorable as new composers were brought in. The music isn’t bad, it kind of just lingers in the background.

Mickey to Donald: Magical Adventure 3 is not as well-honed as its predecessors but will still provide a few hours of entertainment for those that seek it out. Honestly this should have been released in 1995 but what can you do? The Super Famicom game received a fan translation by RPG One however the Gameboy Advance port was released here and is dirt cheap for those who need more Disney in their life.