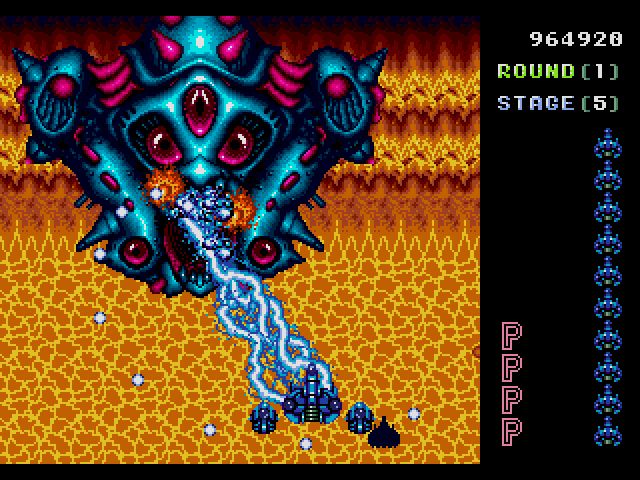 I briefly played Truxton in the arcade but had no recollection of it before finally renting it completely by chance. My memories of a fast action game that never let up held true but I wasn’t prepared for just how difficult the game is. Truxton manages to pack more action into its five levels than two whole games combined. In most cases that would be a good thing since it would seem you are getting your money’s worth but the high degree of difficulty brings down an otherwise solid game. You have been warned.

The weapon system is simple yet elegant. Weapons come in three colors: red for the standard bullets, blue for homing thunder, and green for lasers. To power up your weapons five P icons need to be collected which sounds like a lot but the game is actually pretty generous in that regard. Unlike most shooters the regular cannon is a three-way shot that isn’t completely useless so if you die you can at least survive long enough to collect a few items. Sadly there are no shields but the extremely cool skull bomb will erase any bullets on screen when used. Hell sometimes I used it just because it looks so damn cool.

The level setup is different from most. Each individual stage is one long scrolling act with virtually no pauses in the action right up until the final battle. There are frequent minibosses thrown in, sometimes against more than one ship that do break it up somewhat but aside from that the game never breaks from its slow march. There aren’t even any sort of traditional level transitions! The only way you’ll know it is a new stage is a change in scenery and music. There’s a blandness to the visuals that extends to the enemies and were it not for the constant enemy assault I would even say the game has a lazy atmosphere about it.

That last point is pretty funny in retrospect as this is one of the most difficult shooters I have ever played and that’s saying something. Generally I stay away from the bullet hell stuff and in that regard this game can’t compete. The attacks are relentless, the enemies insanely fast, and checkpoints relatively scarce. In other words the odds are stacked against you. It isn’t that your weapons are weak, far from it. But the enemies are so aggressive and can come from any corner of the screen without warning that you will die constantly. By stage 3 the game is practically throwing bombs and power-ups at your feet because you’ll need it. By that point if you die you might as well start over since it is nearly impossible to build up your weapons without dying again. The game isn’t quite Rayxanber II levels of frustrating but it can be grating. At least it’s doable unlike that…..game.

Despite a mere five levels the game definitely feel like you’ve gone through twice that number in the end. For the truly skilled gamers who manage to beat the “final” boss the game loops and becomes even more difficult. The arcade game repeated infinitely but at least in this version there is a definite conclusion. Defeating the fifth boss will reveal a brief ending in which he gets away. To see the game’s true ending you must complete five rounds or loops; a feat worthy of the greatest gamers among us. I have confidence in my gaming skills but honestly, fuck that.

Truxton was never an exceptionally pretty game and its Sega port is even uglier. The color palette is incredibly subdued and because of that bullets have a tendency to blend in with the background leading to cheap deaths. The game has little in the way of interesting scenery. Most of it is empty space and different colored asteroids. I don’t know why they bothered but a portion of the screen is taken up by a status bar similar to Phelios and Elemental Master. That wouldn’t be a problem if the playing area weren’t forced to scroll as a result and left you open to off screen fire. The bosses are the sole visual highlight as they are large screen filling battleships and tanks. You’re not playing this game for its visuals.

Overall Truxton is a pretty good game but the high difficulty is definitely off putting. This is not a game for casual fans of the genre. While I’m not one to be put off by a game’s challenge in this case I do think it is a detriment. Only go into this knowing what to expect