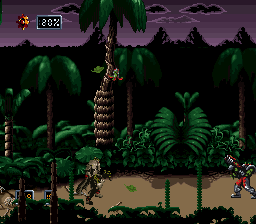 I loved side scrolling action games during the 16-bit era and they were second only to RPGs as my favorite genre. But to an extent the pickings were a bit slim. After loving Contra III, Hard Corps, Alien Soldier, and the various Turrican games what was left were games of middling quality, especially by 1995. Doom Troopers: Mutant Chronicles aimed to fill that void but stumbles in the process due to a lack of polish. If you persevere you can appreciate the game’s few good points but when there are better alternatives out there why bother?

Mutant Chronicles is a tabletop role playing game much like Shadowrun or Dungeons & Dragons with Doom Troopers being its action focused spinoff. Some knowledge of the IP will provide some backstory context for the game although it isn’t necessary. In the distant future mankind colonizes the entire Solar System by terraforming other planets. It all goes wrong when they try to inhabit the tenth planet Nero and unleash the Dark Legion and their leader the Dark Soul. As one of two commandos, Mitch Hunter or Max Steiner it is your job to rid the galaxy of the Dark Legion once and for all.

As a shooter the game closely resembles Contra with a few notable differences. Ammo is not unlimited which is an odd choice for a game of this type. Generally it isn’t an issue as extra clips are almost always available. If you do run out your ammo will refill up to 10 shots on its own. Melee attacks are available but are more or less useless in my opinion. The only differences between characters are their special weapon and that Max takes less damage than Mitch otherwise it comes down to who you think looks cooler.

Doom Troopers is gratuitously violent to an almost comical degree. Enemies that have been shot a few times will have their heads or torso explode in a shower of gore which is followed by a cartoony blood spurting sound effect. What remains of their bodies will still try to fight until you reduce it to a puddle of red stuff. Hanging bodies will decay from the jaw down in gruesome fashion and some enemies even lose both limbs before keeling over and dying. Why the developers chose to go all out in this fashion I don’t know as I’m not familiar with the trading card game this is based on but it comes across as incredibly crass instead of mature. Not that I’m squeamish or anything but this game really didn’t need the gore. What it could have used is more enemy variety as you’ll fight the same three or four dark legion soldiers for the length of the entire game which is lame. They sure do die in spectacular fashion though.

The controls are not the greatest as they can be a bit unresponsive at times. What’s worse than that is the idiotic decision to relegate aiming to a button. That’s right, you have to hold a button down to aim in multiple directions which is just plain stupid. It slows the game down considerably and forces you into positions where you might have to take a few cheap hits in the process of lining up a shot. Aside from the terrible aiming the game’s hit detection and collision are not up to snuff. Point blank shots and kicks regularly pass through enemies while they are under no such restrictions, able to walk through barriers and have lethal aim.

Anytime platforming is called for it’s a crapshoot whether the game’s collision will work or not. I have fallen through solid pieces of ground only to jump halfway through the same ledge and land properly. The game’s level design can be confusing as to whether certain areas will damage you or not, most especially on Mercury.

The game tries to mask its faults by providing a constant supply of health packs and extra lives but its problems are still pretty evident. If it were not for the abundance of power-ups this would be an impossible game to finish. As is it is difficult but you can brute force your way through thanks to the generous respawn system. The game’s few boss battles are creative and a highlight, providing the only real challenge in the game. I just wish there were more of them. This is not the longest game in the world at just seven levels and I don’t imagine most will have trouble completing it in one afternoon.

For a 1995 release Doom Troopers is an ugly game. The pre-rendered sprites are low resolution to the point where you can barely make out their design. In many ways the sprite work looks like a low quality Genesis title that was ported to the SNES with little done to take advantage of its higher color palette. The art direction is also highly derivative. The jungle of the first level is a poor man’s attempt at mimicking Donkey Kong Country’s stylized forest and is just sad in comparison. The lava filled caverns of Mercury look suspiciously similar to the What the Heck? Level of Earthworm Jim, which is ironic considering Playmates would published both games. It isn’t completely bad however. The few times the game decides to forge its own identity its backgrounds can look pretty amazing at times. However these moments are few.

With a little more polish Doom Troopers could have at least been a good game with some rough spots. But its various middling issues combine to make it an exasperating experience. The moments where everything clicks are fun but those are separated by a whole lot of frustration. As much as I wanted to like it you are better off giving this a pass.