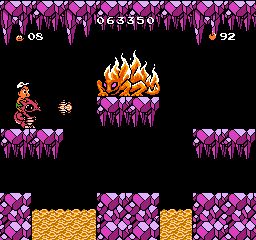 While I was not a humongous fan of Adventure Island the second game in the series went a long way toward making me appreciate what Master Higgins had to offer. It also helped that it also distinguished the games from the Wonder Boy series from which they were derived. After a solid second outing Adventure Island 3 came along and to be honest felt really unnecessary. There’s nothing wrong with the game per se other than it bearing too strong of a resemblance to its direct predecessor. Ultimately this is a solid venture but one that feels like a cash grab than a product with some heart behind it.

Adventure Island 2 did a firm job of establishing the mechanics of the series and for the most part this third installment follows its tenets to the letter. The inventory screen makes its return, allowing you to store extra hatchets and helper animals for future use. The lone new additions to the game come in the form of a boomerang which loops around before coming back and a crystal that grants temporary invincibility. Master Higgins has also befriended a new animal as well, a triceratops who can roll into a ball as a means of attack.

Aside from the ability to crouch and attack however Adventure Island 3 feels like an expansion pack rather than a brand new installment. Level themes are brought over wholesale to the point where if you were to make a quick glance you could very easily mistake this for the second game. The underwater levels in particular are so blatantly copied and pasted that Hudson should feel ashamed of themselves. To an extent you could lobby this same criticism at the Mega Man series as they all followed the same template however each robot master provided wildly different levels with uniquely appropriate traps and enemies. Here the gameplay is so simple and the graphics so identical to the prior game that you can’t help but feel like they didn’t try as hard this time around.

As damning as that sounds however it also means the game is extremely solid. There are smaller mechanical changes that make working your way through the game much more enjoyable. There are less levels per map meaning each themed “world” doesn’t become tired by the time you reach its boss. Adventure Island 2 seemed to pack its islands with far too many levels just for the sake of it so I’m glad Hudson also took note of this as well. Speaking of bosses they also don’t move around the map Mario 3 style if you lose; no more trudging through some of the more difficult stages to get another shot at a boss. I found the length of the individual levels to be perfect as well. They are just long enough to harbor numerous secret rooms and a few tricky platforming areas while also allowing you to breeze through a decent number in shorter gaming sessions.

One area that I found surprising is the game’s challenge. The difficulty curve ramps up pretty quickly and I think will be off putting to anyone not familiar with the series. By the time you reach the end of the second island fruit is noticeably less abundant. Combined with hazards such as rolling boulders and carefully placed moving platforms that require you to slow down you’ll experience quite a few close calls before making it to the exit. Its sets a different pace than the other games and I like it. Boss battles on the other hand are exceedingly easy with simple patterns that offer little challenge.

While I’ve painted a picture of a game that seems to simply reshuffle its predecessor’s assets that would be far from the truth. The forests, caves, and undersea themes are definitely the same but these are joined by deserts, pirate ships, lava, and other standard platforming fare. The game simply doles them out throughout the length of the adventure rather than front loading it. The game has a slightly more angular look that is different but I wouldn’t say superior. For a game released in 1990 it definitely lagged behind its contemporaries.

There you have it. Adventure Island 3 is another solid entry in the series but is also uncomfortably similar to its predecessor. I hate to call any game a lazy cash in as even the most terrible games still require some effort to produce but in this case it definitely applies. If that doesn’t seem all that bad than you could do far worse than AI3.