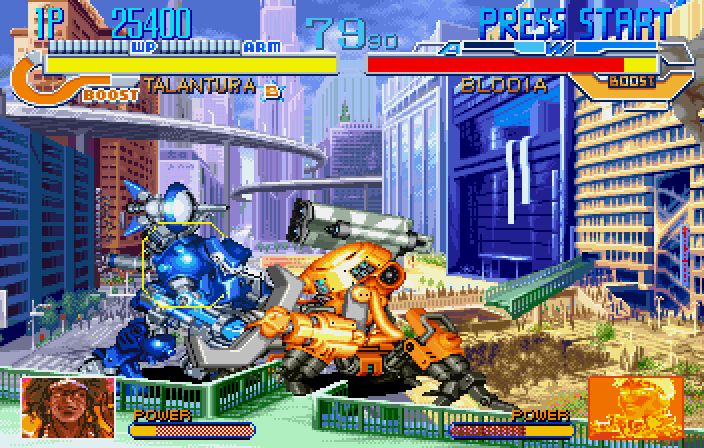 With the advent of the Saturn and PlayStation in the mid-90s the chances of seeing home ports of all the big budget arcade games increased dramatically. While the 3d games like Tekken and Ridge Racer were exciting I looked forward to the 2d stuff more, specifically Capcom and SNK’s fighting games.   I was still too young to know the ins and outs of game development but knew games like Darkstalkers and King of Fighters were too much for my SNES and Genesis. Cyberbots would also join that list and while I had only seen it in magazines I desperately wanted to play it. It would be many years before I finally picked up the import and in the end I was left disappointed. This is a decent game but I expected more.

Cyberbots is a spinoff from Armored Warriors, a little known beat em up that is absolutely gorgeous. Both games were not popular which is probably why the home ports never came to the US. I would imagine that for most their only familiarity with the series comes from Jin Saotomi’s appearances in Marvel vs. Capcom. I remember anticipating the game’s release and was disappointed when it never manifested. However playing it years after the fact shows that I didn’t miss much. While I like the game the bare bones package means it has a short shelf life.

There’s a colorful cast of characters but you don’t simply pick a fighter and jump in here. Once you’ve chosen a character you also select a mech which determines your special moves. The 12 mechs are divided into four categories: Reptos for high speed, Fordy for high mobility, Guldin for high attack output, and Blodia as your well rounder. While this does create some homogenization mechs in the same group still have different arms and legs that vary their attacks. Your choice of character determines how the story plays out although it is lost on those of us who don’t speak Japanese.

As in most Capcom fighting games special moves are executed using quarter circle motions allowing most fighting game fans to jump right in. Although button inputs are shared the game uses a simplified button setup with two attack buttons, a dash, and a weapon button to fire projectiles. Ammo is infinite but you have to wait for the gauge to recharge which balances it out. Obviously the dash button is a gap closer but it will also modify some of your special moves. Depending on the mech you can air dash multiple times and even hover! As an added bonus you can even rip your opponent’s limbs off to further cripple them although it’s random as to when this occurs.

There is definitely a lot of familiar aspects within the game but this is still its own beast. It doesn’t take a genius to figure out that these aren’t the speediest combatants and the game has a slower, lumbering pace appropriate for giant robots. You won’t be executing long strings of attacks and in fact most multi hit combos are more a result of a special move hitting multiple times rather than your ability to link attacks. The simple button setup makes this easier to pick up and play and while there is some depth you’ll have to dig for it.

As a port of the arcade game Capcom have done an exceptional job. However as an all-around package Cyberbots is as dry as they come. You get two modes, arcade and versus and that’s it. There are no extensive customization options and aside from Zero Akuma + the three bosses there are no other unlockables. The bar had been raised in terms of what was expected from a fighting game conversion not just by Namco with the Tekken games but also by Capcom themselves with the various Street Fighter Alpha ports. Seeing the lackluster job they’ve done here is surprising as a result and hurts the game’s longevity. They really should have added more content such as a practice mode or even an art gallery. As is if you don’t have a consistent group of friends the game will lose its appeal quickly.

Even in this day and age of high resolution 2d fighting games such as Blaz Blue Cyberbots is still ridiculously pretty. Since these are giant mechs the sprites are huge with a ridiculous attention to detail paid to all of their individual parts. The animation is extremely fluid and the game never slows down no matter how many large pyrotechnic blasts are being unleashed. It’s similar to Darkstalkers in that regard but even more impressive in my opinion. The backgrounds are beautiful with levels of detail stretching off into the distance, to the point where it’s almost distracting. This version uses SNK’s RAM cartridge for faster load times and smoother animation but even without the conversion is solid.

Considering the game never achieved much popularity in US arcades the home ports are more than likely most gamer’s exposure to it. While Capcom has done a bang up job of cramming all of the insanity of the arcade game to the Saturn the lack of content also means this is a lacking choice compared to the bustling fighting game library for the system. It’s good for what it is but not much more.