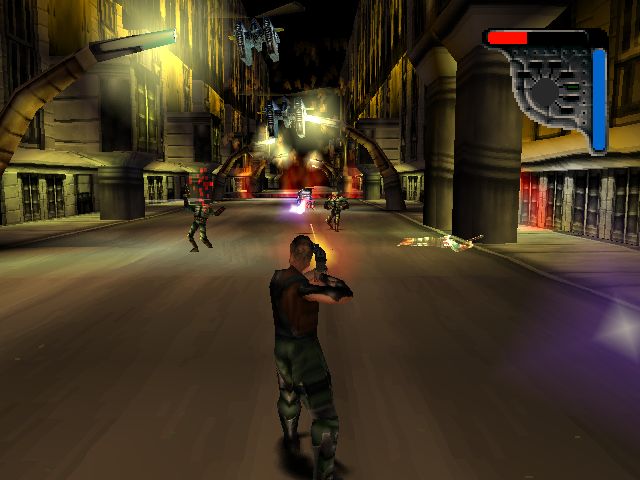 Fans of mindless action games had little to celebrate entering the 32-bit era. With the move to 3d the venerable action shooter was at a crossroads and would have to weather a tough storm like nearly every genre alongside it. Unfortunately the first few attempts at such were just plain sad; Contra tried and failed twice and as much as I liked One it had some heavy flaws. Activision’s Apocalypse seemed destined to share company with the previously mentioned titles but a switch in focus and scope made it turn out to be a far better game in the end and one of the system’s best pure action games.

A scientist named the Reverend has created his own version of the four Horsemen to bring about the biblical Apocalypse to mankind. Trey Kincaid is an inmate who upon hearing this breaks out of jail to put a stop to the end of the world.

Apocalypse was a troubled production for Activision. The initial pitch saw Bruce Willis as an AI partner that followed you through the game and offered help and advice. The limits of the technology at the time played a large part in the game’s eventual redesign. I’d like to believe someone finally realized that if they were paying Bruce Willis all that money he might as well be the star of the game. Either way with its newfound singular focus Apocalypse is one of the better action games for the PlayStation and still holds up favorably today.

Part of what makes Apocalypse so enjoyable is its tight twin stick controls. If you have a dual shock controller than the game is no different than the hordes of indie shooters that have popped up in the last decade with the addition of some heavy platforming. Personally I found using a regular controller more satisfying; using the right analog stick to aim isn’t as accurate surprisingly. Here the game uses an identical setup to Smash TV on SNES, with the face buttons controlling your firing direction and the shoulder buttons relegated to jumping and bombs. Either setup enables you to practically glide through the levels mowing down enemies with reckless abandon.

Apocalypse moves at a brisk pace and doesn’t dawdle too long in one area before moving you along to the next action set piece. Though viewed primarily from the third person the camera will frequently switch to an overhead or side scrolling view. Targeting is not much of a factor as there is a gentle auto aim to assist in mowing down the hordes of enemies. Extra weapons are limited in their use but are dropped frequently enough that you won’t have to rely on the standard machine gun for very long. Most of the game’s nine levels end in a boss battle of some sort, with the most challenging being the battles against the four horsemen. The plot may be cheesy but it at least provides some impetus for the game’s rapid fire pacing and doesn’t bog the game down by trying to tell an elaborate story.

Overall in spite of the nonstop pace the game is of medium difficulty. Health packs are spaced out evenly and dropped at appropriate times, i.e. after dogged fire fights. There is some light platforming thrown in here and there and unlike the disastrous results of One the camera always chooses an optimal view so that if you die it’s your own fault. Although the levels are long (especially the rooftops, seriously that was almost 45 minutes of repetitive action) frequent checkpoints help avoid frustration and anyone with a modicum of skill will reach the end in an afternoon which might seem short but feels appropriate; the game doesn’t overstay its welcome.

In terms of the game’s look it has a lot in common with One except it isn’t as technically accomplished. The game throws you from one set piece to the next at a decent clip and the scenarios are all pretty awesome such as the city streets with its flying cars that wouldn’t look out of place in the Fifth Element. The game’s art direction is definitely too ambitious for the system as most areas are small, dark, and jagged in their construction. The lighting effects are nice and the game usually sticks to smaller enclosed environments to keep its frame rate stable. But there are plenty of times where it dips severely, mostly when any explosions are going off in a room with multiple enemies.

The soundtrack is pulsing, loud, and heavy with a large emphasis on guitar riffs. More so than the music however is the large number of voice clips from Trey Kincaid. Trey is constantly quipping at every turn and unfortunately it’s obvious most of the clips were from the period where he was an AI sidekick as they frequently don’t match up with the onscreen action and seem targeted at someone who isn’t there. It’s also very repetitive which is a common complaint in situations like this. Getting Bruce Willis back into the studio was probably unrealistic and so Neversoft probably had to salvage what they could from the game’s original direction. Too bad the results aren’t all that great.

Those issues aside Apocalypse is a great game and one that miraculously came out of development hell better than it should have. While the game is most notable for Bruce Willis’s involvement it is strong enough to stand on its own without the celebrity endorsement.  This is one of the few truly great 3d action games from that period.