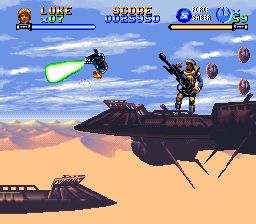 While there have been plenty of video games based on Star Wars and the Empire Strikes Back oddly enough Return of the Jedi has seen few adaptations, making Super Return of the Jedi all the more distinct. Aside from the pretty cool arcade game and a few obscure PC games the final chapter in the original trilogy has gone largely unfettered by game developers. As the last of JVC/Lucas Arts seminal action games Return of the Jedi is probably the all-round best of the three as it leans more towards Super Star Wars in terms of balance while also including passwords to save progress. This was an excellent conclusion for the series and makes up for the punishing difficulty of Empire Strikes Back.

For the most part gameplay is largely the same with some small changes to vary up the playing style of each character. Luke no longer has a blaster and exclusively relies on his lightsaber. The list of force powers has been reduced to just five but they are far more engaging and with more frequent force refills lying about you can afford to be a little wasteful in their use. Han and Chewbacca are largely unchanged but then again they didn’t need any tweaks.

The cast of playable characters has been expanded to 5 with the addition of Leia and Wickett. Love or hate the Ewoks but Wickett is a pretty cool addition to the cast. Wickett is only playable on the Endor and is well suited to the jungle environment. His arrows aren’t very strong but can be used as makeshift ladders to explore the game’s more wide open levels for secrets. Princess Leia is the most interesting playable character as her outfit and weapons change three times during the course of the adventure. The initial bounty hunter disguise comes equipped with a striking staff that can also be used to block attacks and for a spinning attack. The ever popular slave outfit sees her using a whip not unlike a certain Belmont family. By the end of the game she’ll don camo gear and a blaster like Han and Chewie.

What makes the character so interesting this time around is the change in level design. While there are plenty of straightforward action levels like before there are a smattering of open ended levels with more than one path to the exit as well as stages that are combat focused in densely packed areas. Who you’ll choose will have a significant impact on the difficulty; both Han and Chewie need to upgrade their blasters to become more effective while Luke is always a bad ass from the get go. Yet long range attacks make some of the more difficult stages and bosses trivial. It is that kind of balance that makes playing around with everyone much more of a strategic choice and integral part of the game.

It isn’t a stretch to say that Empire Strikes Back’s brutal difficulty might have turned off some fans of the series and ROTJ goes a long way toward rectifying that. The level design does away with cheap elements such as life draining structures and turrets that pop up out of nowhere. Life restoring hearts are in greater supply and if you are playing as Luke Force healing is always available. Collecting 100 emblems will award extra lives and choosing the right character for a given level will make things much easier. In some respects the game might be too forgiving as I had little trouble breezing through the majority of the levels but that might simply come from my familiarity with the prior games as a whole.

That isn’t to say the game still won’t kick your ass though. Boss battles in particular are still long drawn out affairs with some of the early encounters being far more difficult than necessary (the first boss you encounter is a big what the f___ in terms of difficulty spikes). Emperor Palpatine in particular is one of the cheapest final bosses in any game and was the source of much controller slamming frustration on my part. Some of the larger levels can be confusing as to where to go and more than likely you’ll suffer a few cheap deaths trying to double back to see if you missed something. However I’ll gladly take these mild moments of frustration over anything I dealt with in ESB any day of the week.

Super Return of the Jedi, like its predecessors is an exceptionally pretty game and even more so than its prequels. As a late SNES release it stands up favorably to similar titles in the genre with remarkably detailed backgrounds and smooth character animation. The scrolling is often 3-5 layers deep with plenty of foreground objects that add that extra layer of touch that make the environments come to life. Return of the Jedi benefits from more varied locales than Empire Strikes Back so you’ll never spend too much time on one planet before moving on to the next in following the movie’s plot. The Mode 7 vehicle stages make their return and are just as lovely although the game’s final two levels are a confusing mess. The only bad mark on the game’s presentation is the rampant slowdown on some of the game’s more hectic levels; they really should have used more restraint as it gets pretty bad at times.

John Williams sweeping score has once again been recreated extremely well and goes along well with the original compositions created specifically for this game. The repetitive digital voices of ESB have been replaced by a few of the more iconic sounds from the film such as Jabba’s chuckle and Wicket’s Niichaa! Shout. The sound effects are especially crisp and don’t suffer from the usual muffle effect present in many SNES games.

Return of the Jedi might be the least popular of the original trilogy but as a game it is far and away the best in the series. There’s something for everyone here even if you aren’t a Star Wars fan making it one of the best action games for the system.