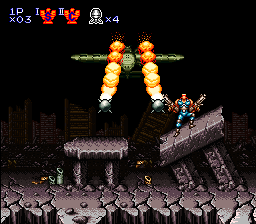 A Hollywood blockbuster in video game form.  That’s the simplest way to describe Contra III.  Take everything from summer action movies, the explosions, the booming soundtrack, and distill it down to its essence and you have the Alien Wars.  By this point the Contra series had achieved iconic status so the game was highly anticipated, and it managed to blow away all expectations upon release.

Contra III: the Alien Wars was released in 1992 for all regions and finds our heroes once again battling Red Falcon and his alien forces, who have since regrouped and initiated a full on war against Earth.  Just like a summer action movie the story is non-existent.  You battle the alien forces across six diverse levels which does not sound like much but trust me, you will be grateful there are only that many.  Luckily your arsenal of weapons has been vastly expanded to combat this menace.

New to the series are the Homing Missiles, Flamethrower and the Crusher Missiles as well as the ability to stockpile screen clearing bombs.  Each new weapon has its pluses and minuses: Homing Missiles are extremely handy but very weak, the Flamethrower is powerful but has a short range, and the Crusher Missiles are your strongest weapon but cannot be fired as rapidly as everything else.  They are best saved for the bosses.  You now can carry two weapons at once and only lose whichever is active upon dying.  You can also fire both at the same time which, while looking cool I never really found a use for.  It also carries causes you to lose both weapons if you die.  Lastly, you can climb on nearly any surface including ceilings.  Sounds like you have the makings of a walking terminator but all of these abilities are needed to survive the excellent levels.

The level design is in a word, outstanding.  Every level is a departure from the last and the game takes you on a roller coaster ride of action set pieces.  Level 3 is a nonstop parade of boss fights, with each one upping the ante until the level’s climax.  Level 4 sees you speeding down the highway on your motorbike only to ascend to the sky for the level’s culmination.  Levels 2 and 5 are overhead levels that allow you to choose your starting position and plot your route as you destroy 5 cores to unlock the boss.  The mode 7 effects are really put to use in these levels as you constantly rotate the screen to navigate.  These mark the biggest exodus from the traditional gameplay and honestly while some people hate them I think they break up the flow of the action nicely.  That flow is the game’s chief asset; when the action is heavy you barely have time to breath as you move from point to point.  But when the game slows it down you can take things at your own pace.  It’s all very measured.

The challenge is tuned perfectly depending on the difficulty selected.  Easy will allow you to adapt to the game’s nuances. Normal presents a decent challenge but remains doable.  Hard is exactly what the name implies, and as an added bonus is the only w;ay to see the true ending, which I’ll add is more than worth the hassle.  Oh yeah, no Konami code to save your ass this time around either.  You’re going to have to earn your ninja gaming stripes the old fashioned way.

This is one of the few games where the Hard difficulty is a legitimately new experience.  Bosses have new attacks, increased immunities to certain strategies, and as insane as it sounds, everything moves faster.  The bosses steal the show in every scene, with some incredibly creative scenarios.  The moment the final boss of Area 3 rips open the walls to fight is one of the greatest scenes in video game history. Likewise the final boss of Area 4 is one of the most awesome encounters from that era.  How many other games have you jumping from missile to missile while fighting a massive mother ship?  On hard the final boss even has one more form to contend with just when you think it’s over.  You’ll need the reflexes of a cat to overcome these odds, but if you are willing it’s a war worth winning.

Almost 20 years later and this still remains the pinnacle of the series.  That right there is a testament to its quality.  Not many games can withstand the test of time so well and Contra III definitely stands proud among that elite class.