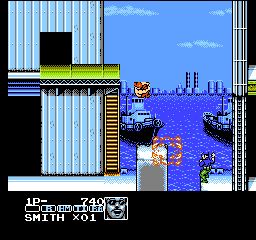 I hope all of you appreciate this.  It’s not just any day that a game legitimately makes me mad just by being terrible.  But this is Contra man!  I love this series and have many fond memories of playing each installment for weeks long after I had finished them because the gameplay is so good.  How could it go so wrong?

Contra Force was released for the NES in late 1992, well after Contra III.  This was supposed to be the third in the series before it made the jump to SNES but delays changed that.  I distinctly remember seeing the Alien Wars labeled as Super Contra IV in the February ’92 issue of Gamepro (respect my gaming knowledge son).  In fact it wasn’t even a Contra game originally but an original product that was cancelled in Japan and retooled as a spinoff for the US.  Right there you know something is wrong.  Set in modern day the Contra Force is an elite unit tasked with taking down a terrorist cell In 1 or 2-player coop gameplay.  The game spans 5 levels, 3 side scrolling and 2 top down much like Super C.

There is very little that connects this game to the others in the series.  I’m scratching my brain trying to think of some.  Well you curl in a ball when you jump like Contra.  I think that’s it.  Oh yeah, you die after 1-hit.  Rather than Bill & Lance you have your choice from the 4 members of the Force team: Burns, Smith, Iron, & Beans (really?).  Each has 4 weapons selected by powering them up Gradius style.  In truth, 2 of them are the same for every character which is disappointing.

What is pretty cool is the ability to change members at any time.  There is a second function to this in that they have their own separate life count, and switching before losing all of them will prevent a game over.  In addition you can set 1 up to be controlled by computer AI in one of 6 formations and they’ll assist you for about 5 or 6 seconds.  There’s no limit to this and if you feel like it you can spam it over and over.  There are slight differences like run speed but not to the point you’ll notice.  So why is it so bad?

The basic action is terrible.  Everything moves at a ridiculously slow pace, a far cry from the action established in prior installments.  When you think of Contra, you picture fast action, bullets flying everywhere from a large array of enemies and bad ass weapons to destroy them with.  You get none of that here outside of the bosses.  You rarely face more than 2 foes at a time and the enemy variety is lacking, with about 6 or 7 comprising the roster.  Because you need to collect briefcases to change weapons you’ll spend an inordinate amount of time with your basic rifle.  A large portion of the environments are destructible which is where you’ll find these cases but to find even one you’ll need to blast everything in sight repeatedly like you have OCD.  It’s just not fun.

The different weapons each player has sound nice in theory but most of them are useless.  Smith’s homing missiles are the most useful but you’ll rage at the screen as they slowly circle around you before heading toward a target.  Beans timed bombs are absolutely stupid in a game where you want to shoot the enemy long before they can reach you.  The overhead stages are vintage Contra and are one of its highlights with excellent graphics and tricky enemy placement.  The bosses also echo classic Contra with the only down side being they take entirely too many hits to kill.  Too bad those bright spots don’t save the game.

Don’t play this game and have your precious memories of the series tarnished.  Even divorcing it of the Contra name, it is still a sub par action game.  There are far better games out there, like Bucky O’ Hare, conveniently from Konami too.  Play one of those.