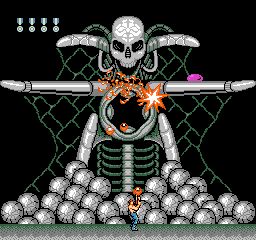 When I first played Super C I didn’t think much of it.  Maybe it was due to my extremely limited amount of time with it or I just didn’t feel like playing a Contra game at the time.  My first real sit down with it came in Christmas of 1991when my cousins received it as a present and proceeded to berate my NES library, saying that it was better than every game I had.  Mind you, this wasn’t exactly a high bar to beat when your competition is Mystery Quest, Wizards & Warriors, and Milon’s Secret Castle.  Anyway now that I had the chance to soak in the game’s details I could finally see it for the excellent action tit;e that it is.

Forget the story; it’s not important.  All you need to know: the aliens have returned, Bill and Lance are back to kick some ass, go.  A port of the arcade game, Super C is Contra on steroids.  The bosses are bigger, the enemies more dangerous, and everything looks and sounds so much better.  The NES game might not look as good as its arcade counterpart however it is a more substantial roduct with numerous additions that help increase the longevity of the game.  Super C is one of the best pure action titles for the NES and upholds the Contra legacy beautifully and is still a blast to run through today.

All of the original weapons return with no new additions which sounds bad at first but considering how effective they all were to begin with it has little bearing.  The lone change would be the fire gun which has been redesigned so it isn’t the most useless of the bunch anymore.  Now you can charge it and let off a larger fireball that passes through enemies and explodes on impact.  The home version has 3 more levels than the arcade for a total of 8 with longer stages to boot.  Missing from the arcade is the ability to control the height of your jumps and the ability to carry a screen clearing smart bomb.  The main upgrade over Contra would be the level designs themselves.

For the most part Contra was a strictly left to right affair, with stage 3 and the 2 forward scrolling levels as the exceptions.  Now in Super C, the terrain is far more varied with inclines and more vertical movement.  Levels 2 and 6 are played from an overhead perspective as you face an onslaught of enemies similar to the later Contra III.  Level 5 sees you advancing up a mountain like the waterfall in the first game, and just like that level the designers have cleverly placed numerous boulders and enemies that will punish you for trying to rush too fast.  Level 7 switches things up as you progress downward through an alien hive with monsters practically blinking into existence as you scroll down.

There are numerous traps that lie in wait aside from the previously mentioned boulders; in level 4 advancing to fast will activate the collapsing ceiling before you can react. The lead up to the final boss of stage 3 is epic, with crumpling floors and its numerous bosses.  These don’t sound like major additions, and truthfully they’re not.  What they do is break up the flow of the game and make you pay attention.  The game consistently alters the flow of the action, giving you brief moments of peace before the mayhem is renewed but at no point does it ever get boring.  The entire game is loaded with many “oh shit I didn’t see that” moments with soldiers popping out from cover behind you or even underground.

There is no Konami code to save your ass this time around.  Rather than the overly generous thirty lives of the first game you only get this time with a different code which is a fair amount.  Those 10 will disappear quickly as the difficulty is right up there with its predecessor.  The bosses while sporting awesome designs will definitely kick your ass and combined with snap enemy placement will make all but the sturdiest gamers tap out.  Despite that I would say it’s a fair challenge that can be overcome with perseverance, as it should be.

It’s Contra. That should give you an idea of what to expect.  It’s bigger, badder, and better than ever.  That’s all you need to know.  You either love it for its ball busting challenge and tight gameplay or hate it because you lack the skills needed to rise to the occasion.  I know what side of that fence I’m on, what about you?