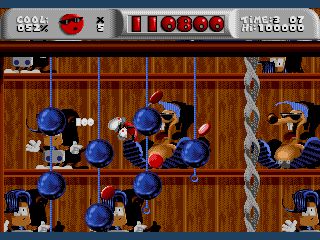 Once upon a time David Perry was part of an incredible team at Virgin Interactive who were capable of turning any license into gold.  The likes of McDonalds, Disney, and Warner Bros. were graced by their hands and in 1993 they created their strangest product yet, Cool Spot.

There is no story, all you need to know is that you are Cool Spot, you collect various trinkets and the object of the game is to free your companions scattered around each level.  Why they chose to make a game based on a soft drink I don’t know, hell I don’t even know if they even still make 7up sodas anymore.  What I do know is that Cool Spot is an awesome game regardless of its license and executes its formula better than most games of the same type.

Cool Spot is a platformer in every sense of the word.  You are armed with an array of abilities to traverse each environment.  From jumping, climbing, and hanging onto ledges and firing soda bubbles in every direction these powers are necessary to cross the massive levels.   Each level has a captive spot that needs to be freed in order to exit the level.  The number of red spot icons required to break the cage increases as you progress, making the time limit an ever present threat.  These come in 2 flavors, single red dots worth one and 7up icons that are worth 7.  The only power-ups available are, you guess it,  7ups drinks to restore life and clocks for extra time.  If you collect spots you can enter the awesome bonus levels for a chance at continues and extra lives, both of which you’ll need since the game is a bit tough and has no passwords or battery backup.

Each level is gargantuan in size and has an abundance of secrets and paths to find.  Although you have to be mindful of the clock for the most part there is ample time to explore.   There is no straight path to the exit, hell the exit is never in the exact same place in each level like you would expect.  Like some of the later Sonic games’ finding the optimal path of least resistance is what makes each level special.  The sense of scale is exploited to its fullest extent since each level is based on theme so to speak, such as the beach, the docks, and even the walls inside of a house.  You’re a little man in a big world so normal everyday objects are hazards in addition to the enemies.

The bonus round is an amusement park ride inside of a soda can.  Your goal is to collect the 7 letters that spell U-N-C-O-L-A (subtle!) to amass continues.  They start off simple enough, with nothing but the bubbles needed to ascend the can but soon pile on spikes that need to be destroyed to progress.  Yeah that’s right you can die in the bonus rounds.  They definitely do not make it easy to reach the end of the game that’s for sure.

It helps that Cool Spot is a beautiful game.  Either on the Genesis or SNES the look is vibrant and colorful with truly amazing art for each background.  As was mentioned before each level has a theme that  it is  based around and informs what enemies you’ll see as well.  The only negative to the graphics are that halfway through they are repeated.  The layouts change but it isn’t very fun to work through another massive dock level again.  The music as well is outstanding, with a suitable array of jazzy tunes mixed with some cartoonish themes to compliment the mostly reggae soundtrack.

Aside from the repetitive levels toward the end and the difficulty there are no faults with Cool Spot.  It doesn’t attempt to ape the more popular side-scrollers of the day and instead walks its own path and is stronger for it.  Now if only they had done the same for the terrible sequel……………