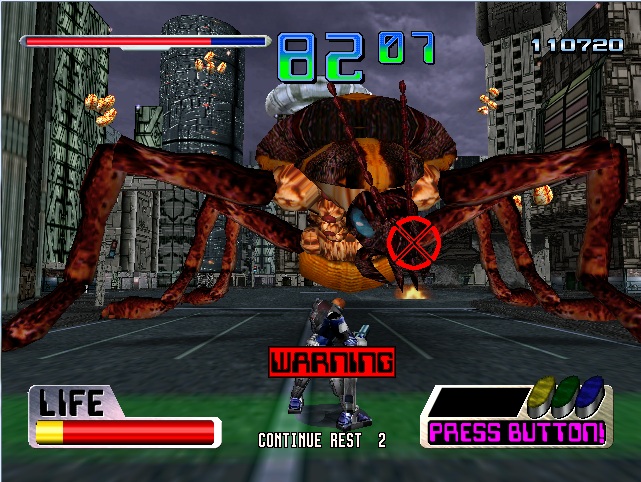 I’ll say this:  Sega’s Naomi arcade board was a versatile piece of hardware and one of the most widely used, and its synergistic relationship with the Dreamcast allowed for a large number of home ports of arcade favorites.  But that also begs the question should you port everything just because you can?  In the case of Charge ‘N Blast not really unless you fully flesh out the experience.

Originally released in the arcade Charge ‘N Blast places you in the shoes of one of 3 marines in powered armor charged (heh) with clearing out each level of enemies before moving on.  The game wears its arcade heritage on its sleeve with quick stop and go action perfect for short bursts of play.  However that does not make for a compelling home experience, especially with how short the game is.  With no additional modes or extra levels and because of its brevity Charge ‘N Blast wouldn’t even cut it as a rental much less a full priced game.

Played from a third person perspective it echoes classic arcade games such as Cabal or Nam 1975 or now that I think about it the Earth Defense Force series.  The basis of the game revolves around the 3 weapons each marine possesses.  Each weapon has different rankings in terms of speed, power, and radius which is important to clear each vignette as fast as possible.  Rather than allowing you to spam each you’ll have to charge each first before attacking, hence the name.  Each level is broken up into short single screen segments that are timed and tasks you with clearing out all enemies before moving on.

With its intuitive control scheme and satisfying weapons it can be a rush to pull off a last minute attack before getting hit or a chain kill for more points.  There’s a certain amount of skill needed to know when to employ each weapon as well judging the distance of your attacks o you don’t waste a shot or more importantly time.  Auto aim is for sissies.  With time in short supply every shot needs to count.  Experimenting with each character’s weapons to find who you identify with is essential.  But right when you begin to enter the zone and everything clicks it’s all over.

It’s no exaggeration to say that most will finish this in about an hour.  And unlike most arcade ports there are no extras like artwork, hidden levels or characters to entice you into playing again.  It’s uncharacteristic of Sega to produce such a bare bones port, especially when the base game is lacking in content.  Something as simple as alternate routes through each stage would go along way towards increasing the game’ s replay value.  While the Time Attack mode is a nice gesture it simply isn’t enough.  In an arcade where you have limited time and probably want a quick fix Charge “N Blast was perfect.  As a home game it’s severely lacking.

The Dreamcast oddly enough lacked a stable of pure action games; off the top  of my head I can only think of Expendable and Cannon Spike.  This could have gone a long way toward expanding the options in the genre for the system.

Back in 2000 when it was a full priced release this would have been a rip off.  But if it were re-released as a downloadable title with online leader boards and a versus mode maybe it could find a second lease on life.  However the aforementioned Earth Defense Force games are everything Charge ‘N Blast tried to be and more.  I would recommend any game in that series before giving this a shot.