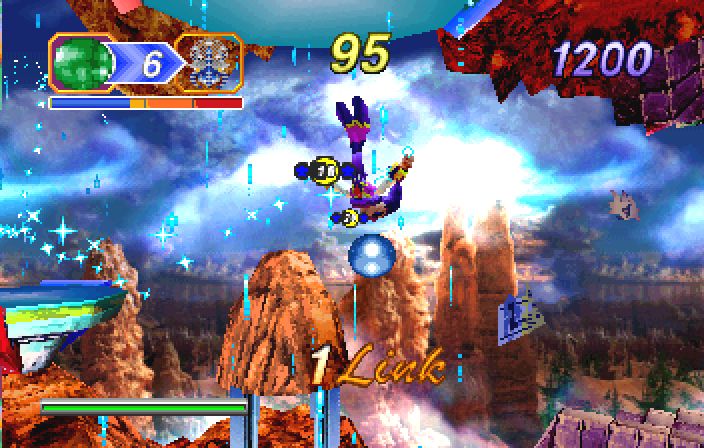 Inspiration for game ideas can come from all walks of life.  Allegedly Yuji Naka came up with the concept of Nights while on a flight back to Japan and in that moment a star was born.  Or should have been if Sega had not spent the following years doing their best not acknowledge his existence.  Nights is every bit a classic of that 32-bit era like Super Mario 64 and Crash Bandicoot but doesn’t get the respect it deserves.  Well I’m here to give it it’s just due.

The dreams of humans reside in two worlds, the peaceful realm of Nightopia and the twisted land of Nightmare.  The Ideya that populate Nightopia are in distress however as the ruler of Nightmare, Wizeman has been stealing all of the dream energy to conquer both worlds.  His twisted Nightmaren are the antithesis of the Ideya however one lone Nightmaren named Nights rebels and is imprisoned but not before contacting two humans with the rare attribute of courage to help save Nightopia.

It sounds hefty for a game of this type however the world building is crucial in making you care about the protagonists’ plight.  By helping Nights both Clarice and Elliott are helping themselves realize their dream which is what the game is all about.  With its unique setting and infinite replay value Nights was critically acclaimed but never reached the level of success it deserved due to the inner turmoil at Sega at the time.  However true classics never grow old and Nights remains just as fun today as it was in 1996.

While the game offers promises of free flight that isn’t completely true.  As Nights movement is restricted to a set path with numerous deviations and can fly anywhere within that zone.  While it may sound disappointing at first it works to the game’s benefit.  Offering a free roaming experience would completely kill the game’s focus on memorizing the level layout and scoring as many points as possible within the set time limit.

Each level is massive level is broken up into 4 timed sections  and a boss battle with the goal of each being the same: collect 20 Ideya and destroy the Idea Capture as soon as possible then use the remaining time to score points return to the palace at the start.  Failure to do so results in turning back into your chosen hero, losing all of your collected Ideya, your points, potentially failing the stage by being woken by the ever present clock and receiving a failing grade for that sequence.   That’s some tough shit.

The true genius of Nights in its elaborate level design.  At any given time you can see rings, Ideya and other objects in the distance that you can’t reach.  The individual segments are laid out in such a way that if you’re good enough you can chain together long strings of links and increasing your score multiplier.  Like many of the best shmups taking advantage of the scoring system will require many little tricks, such as using Nights’ paraloop maneuver to scoop up large masses of stars and Ideya in one shot rather than individually.  The vacuum basically turns you into a magnet and dragging objects behind you is necessary to create bigger chains.  There’s a risk versus reward structure to it in that the longer the chain the shorter the window to keep it alive but the rewards are justified.

For those that like to min/max Nights is basically a dream come true.  The initial run through each level section is to learn object placement and determining the best “route” for later.   No matter how many times you try there’s always some way to improve and shave a few precious seconds off each run through, thereby creating more time for another run.  I put “route” in quotations for a reason: although you are limited to a predetermined path you are not given a full view the screen and there are multiple paths in each, some less optimal than others.  So in a sense the game still manages to give you the feeling of free flight within its set parameters.

If you had to lobby any one criticism at the game it would be that there is no real sense of danger outside of running out of time.  There are very few enemies and direct collisions only result in a -5 second penalty.  Even the boss fights give you a generous 2 minutes to complete and there patterns are beyond easy to decipher.  You only need an overall C grade to unlock further stages and you’ll really have to go out of your way to screw up.  I view this as a plus to be honest as it places the focus squarely on scoring and leaving failure down to whether you can avoid being greedy and running out of time as a result.

Nights was one of the prettiest Saturn games released and even today is still beautiful.  The art direction is simply astounding and the mix of 2d backdrops and 3d objects is a perfect marriage of the Saturn’s strengths.  The heavily pixelated look adds to the game’s charm.  A number of effects not prevalent in most Saturn releases are on display such as heavy light sourcing and gourad shading.   This tight engine comes at a cost though as there is some nasty popup and that ugly mesh pattern used in place of true transparency in Saturn games rears its ugly head.  The soundtrack might be more amazing the visuals as the OST spans a range of genres such as classic music, jazz, and ambient tracks.  Hell there are a number of vocal tracks that are actually good!

So there you have it.  One of the best Saturn games released and also one of the best games of that generation Nights deserves to be experienced by anyone even slightly interested in videogames.  Sadly the Playstation2 remake is a Japan only exclusive so you have no choice but to hunt down a Saturn and a copy of the game but in my opinion it’s worth the meager amount you’ll pay.