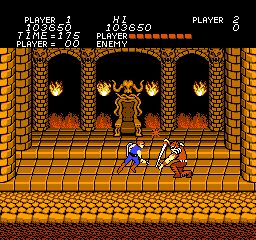 In the early years of the NES the concept of replay value hadn’t sunk in yet.  Oh I’m sure there were games that had hidden secrets waiting to be discovered but for the most part we replayed those old classics over and over for two reasons: they were just plain good games and you know, we didn’t have money to buy another new game.  One such game was Trojan by Capcom. An arcade port released in 1987 I never bothered finding out what the plot of the game is.  Set in the future after a nuclear war you control a warrior hired by the people to defeat the dictator who rules the world.  If only life were so simple.  The NES version is an excellent conversion that also adds a number of features to the game making it the superior experience overall.

The first feature of note is the odd control scheme.  One button controls the sword and the other your shield, with jump relegated to the d-pad.  Normally this would be sacrilegious but the game is designed such that it works.  Attacks come from all sides and in short order you’ll be grateful for that shield.  With the ability to block in front, low, and diagonally it becomes an invaluable part of the game.  The controls are extremely, giving you the ability to switch from attack and defense immediately; in the later stages of the game this skill is mandatory.

The challenge is high from the beginning.  Enemies will swarm in great numbers, with arrows and daggers flying in addition to the standard peons.  By the midpoint of the game you’ll need to have mastered the controls and all their quirks because the computer AI is ruthless at that point.  And that is to say nothing of the bosses.  The ultimate test of your reflexes, you’ll need to identify their patterns in short order to come away unscathed and beat the timer.  Despite the odds stacked against you however Trojan remains fair overall.

The NES version although simplified in some ways such as less enemies and the removal of a few from the arcade at the same time adds a number of items and features as well.  Some bosses have had their attacks changed, such as the Goblin’s shuriken exploding into bats.  Iron Arm, the first stage boss now launches his arms and they fly high and low before returning.  A new boss, King Shriek waits before the final boss to test your skills before the final challenge.  Some additional powerups have been added as well, such as extra points, health pickups, and extra lives.  This isn’t the longest game in the world so every little bit helps. Interestingly this NES version contains what might be Capcom’s first foray into one on one fighting games.  The vs. mode contains many of the elements that would be expounded on later in Street Fighter, such as the round structure, different hit levels, and even air blocking.  Although you are limited to the main character and his Trojan clone it’s a nice bonus overall.

Although it’s a short game that didn’t stop my family and I from playing it over and over to see who could finish the fastest.  This isn’t a long game so on that front I wouldn’t recommend paying more than a few bucks for it.