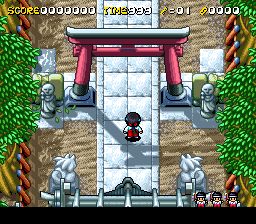 One of the greatest joys of being a gamer is coming across a hidden gem every now and then that is an absolute blast to play. It isn’t as easy for most games to fly under the radar these days due to social media but back in the 80s and 90s we still relied on magazines for coverage and they only had so much space, meaning many lost classics never received the exposure they deserved. Pocky and Rocky was one such title, an enjoyable top down shooter and awesome sequel to a bad arcade game. But apparently it sold well enough to warrant a sequel that brings more of the same action but also incorporates a number of features to make it an even better experience.

The harvest festival is held every year, with this year in particular being special as Princess Luna has come down from the Moon to join in the festivities. Unfortunately a group of demons use this as an opportunity to kidnap her. Pocky sets out with a new set of allies in tow to rescue the princess and defeat this mysterious new threat.

Featuring the same top down action as the first title Pocky and Rocky 2 features a few sterling changes that will alter your approach to the game. There is no longer a life bar and instead damage is based on how much armor you have. At the most basic level you can sustain two hits before death but can purchase armor to absorb three blows and bunny ears (!) for one extra. It’s a change that means you’ll have to focus on using your wand to deflect attacks more frequently as well as always be on the move, especially since you can no longer slide. Lastly the two divergent paths your Hanafuda cards could take has been simplified but for the better, with the cards at first gaining rapid fire and then doubling in size and strength.

The game is still two-player coop however in single player you will always have a partner character with you at all times who can be switched out at the start of each level or by collecting an item. Rocky returns and is unchanged and is joined by Bomber Bob, whose name is self-explanatory, and Little ninja. The initial trio will eventually be joined by four more characters who will join you in each level such as Tengy, Scarecrow, Digger, and Ottobot. Each has their own specialty and you’ll have the option of changing multiple times during each level for the maximum benefit.

For the most part your partner will follow your movements and also attack enemies in the vicinity but their real worth comes in their abilities. They’re also technically invincible; they can take a few hits before “dying” but will come back after a brief period. You can completely abuse the hell out of this to survive hairy situations, especially boss fights although the time they are gone in those situations can be pretty dire. By using magic Pocky will inhabit their bodies and use their powers; Rocky can find hidden items, little ninja can open locked chests without a key, and Bomber Bob can chuck boulders to open secret passages.

In the absence of a smart bomb Pocky can toss her partner at enemies. If you miss you’ll have to wait about 10-15 seconds for them to come back. When used on bosses it becomes a Panic Bomber attack with different effects depending on the character. These attacks can be devastating, especially if you can catch them in a corner. The boss fights are long since the bastards are basically bullet sponges so these attacks are crucial to shortening these drawn out affairs.

At nine levels it would seem the game is longer but in actuality it is about the same length as the first game as the levels are shorter overall. The first level is a practice stage to teach you the game’s mechanics (which is worth it in my opinion) and can also be skipped. The inclusion of light RPG elements such as currency, shops, armor upgrades, and townspeople to speak with in each level gives the game a Legend of the Mystical Ninja vibe that I dig. Removing the life bar has made it tougher but at the same time the additional game mechanics make up for it wonderfully and more importantly are fully explored within the game’s framework. Add in passwords to save progress and you have a game that successfully updates the series mechanics while also fixing its prequel’s few faults.

Graphically there haven’t been great strides made technically as the general look is still the game but what has improved is the game’s art.   The locations you’ll visit are more diverse and rich in color as well as the demons you’ll face. The special effects that accompany the panic bomber attacks are pretty cool to witness with giant plumes of fire, geysers of water and other effects that up the visual pizzazz. There are more enemies that crowd the screen at once, inducing slowdown but these instances are few in number. The soundtrack has expanded in number but I would place it on the same level as the first game; adequate but nothing spectacular.

Pocky & Rocky is both familiar and different at the same time with sweeping changes that creates a distinctive experience compared to the first game. It’s also one of the best top down shooters from that era. The game was released in limited quantities so its pricey but if you find it at a normal price I would say jump in immediately.