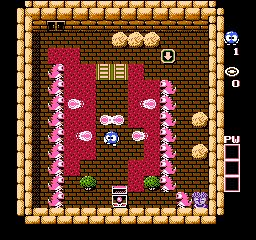 These days developer Hal labs seems to release a new Kirby game every six months and while normally milking a series to that degree would be bad I am continually amazed at how unique nearly every entry in the series has been, with some like Kirby Canvas curse being truly innovative. However during the 8-bit era they were one of the most diverse developers around, seemingly able to handle nearly every genre possible. In 1989 they compiled a collection of some of the most creative puzzles from their PC series Eggerland for the NES created one of the most brilliant puzzle games the platform whatever see. Time is done little to diminish just how amazing this game is it still holds up today.

Adventures of Lolo revolves around a simple concept. Logo must collect all of the heart framers in each room to unlock the chest that will in turn opens next room. Is a lot easier said than done however as each room contains numerous obstacles that must be dealt with in order to be successful. It is in this aspect of the game truly excels as the puzzle design is truly excellent. There are 10 floors with five rooms each and the game has a perfect the learning curve. Reaching the top will require plenty of lateral thinking to solve even the simplest puzzle. It’s hard to believe but the advances of Lolo manages to introduce new mechanics enemies and even clip that makes even the late game fun. This is easily one of the best puzzle games for the NES and one that deserves a higher profile.

In terms of mechanics Lolo is a deceptively simple game. Although Kirby & Lolo both look pretty similar in terms of gameplay that couldn’t be further apart. Where Kirby can eat is eat his enemies and gain their abilities Lolo only has the ability to push blocks. Abilities and items open up when necessary, with the most frequent being a magic shot that will turn and reason enemies into eggs for brief period of time. Once this is done a second shot or move them the playing field for brief period of time but it is more prudent to use frozen enemies for a variety of purposes. Frozen enemies can be used to block projectiles, cross bodies of water or even blockade some of the more tricky that guys. If you’ve screwed up the game conveniently has a suicide button so you can start over; trust me you’ll be using it.

Standing in your way of the various denizens of the tower block your progress in any number of ways. The most common enemy by the snakes don’t actually do anything actually more help than a hindrance. Generally snakes can be ignored but usually they are the key to solving each individual puzzle. As an example reduces will freeze you once you move into their line the site however a snake in the turned toward egg and moved to block their line of sight. Skulls only activate once all the heart framers of been collected. Dragons are similar to Medusa’s but only activate when all the heart frames are collected as well. In this regard most of the puzzles boiled down to set up; positioning blocks or other enemies so that once that last heart framers is grabbed you have a clear path to the exit.

Not all enemies are passive. Leepers will follow Lolo around and fall asleep once they touch him. It sounds silly until he boxes you into a corner forcing you to commit suicide and restart but also has its benefits; he can be used to trap other enemies as well. Home of the armadillos the only enemy that will aggressively chase Lolo, becoming active as soon as you move. Rocky is not too common but will also follow you around and will speed up if you enter his line of sight.

There are definitely some head scratching puzzles within the game and just when it seems nearly impossible you’ll stumble across the solution, usually so simple that you wonder why you didn’t see it before. It’s definitely addictive, to the point you’ll find yourself completing just one more puzzle because it was so engaging the last time. There’s nothing worse than setting up an elaborate series of blockades and grabbing the last heart framers only to realize that you screwed up right from the start. It sounds frustrating but these moments have just the right amount of “oh yeah” that you won’t even mind. The difficulty curve is perfectly balanced as the game introduces new mechanics such as one-way arrows hammers to destroy Iraq’s and ladders to bridge gaps at a decent clip. You’ll definitely stare at each puzzle for decent amount of time before even making your first move. There is a heavy trial and error element to the upper floors of the tower luckily there are passwords and unlimited continues making again accessible to everyone.