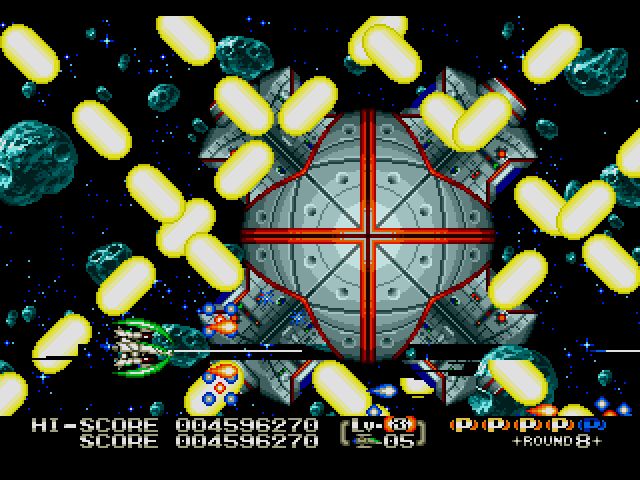 I’ve always been amazed by video game developers who only create a single title and then disappear overnight. It’s tempting to call them a one hit wonder but in most cases the games weren’t hits regardless of their quality. Clockwork Tortoise created the Sega version of the Adventures of Batman & Robin, a game so technically incredible I still can’t believe it’s a Genesis game. While there were many shooters for the system created by some of the best in the business you’ll never hear the name Aprinet. That’s because their only title, Eliminate Down only saw release in Japan and South Korea. However in one fell swoop they made one of the top 10 games in the genre for a platform buckling under its sheer numbers. Not bad for a company no one has ever heard of.

Eliminate Down only has a few weapons unlike most shooters. You are always equipped with the game’s three weapons: the forward firing blaster, the rear firing laser, and the four way bombs. The forward blaster covers a wider area when upgraded. The rear laser actually isn’t a laser but instead spits out Zs (I know, it’s weird) at a 45 degree angle. The four way bombs travel along the surface of whatever they touch until they hit a target. All three weapons can be upgraded three times by collecting five power chips each. Leveling your weapons is a painless process as the items drop frequently and as a bonus they all increase in power simultaneously. The only other power-ups are a barrier that protects you from damage and an upgrade for your standard shot.

Three weapons isn’t much however the game was designed around this. The level design is generally excellent, encouraging frequent weapon swapping at every turn. The levels scroll in every direction and trying to rely on one given weapon simply does not work. By the end of the game each will have had its moment to shine regardless of how weak they seem. The mid boss of Round 5 will force you to use the rear laser exclusively while the four way bombs are essential to completing its latter half. I will admit though that as much as I like the way the designers made each weapon essential I would have appreciated at least one option that was more powerful and had a more focused shot. None of the three options available have the necessary punch to them, leading to drawn out boss fights.

Unlike the vast majority of shooters on the market Eliminate Down is fairly median in terms of difficulty, at least its first half. Death doesn’t carry as big a penalty here as your weapons are only downgraded one level and you respawn instantly, avoiding the frustration of being thrown back to a checkpoint. This leaves you with a fighting chance although if you were in the zone it’s hard to get back to that state. The mid-level bosses are actually more terrifying than some of the end level mayors at this point in an odd twist but I feel the difficulty is near perfect, to the point where it is fun to experiment and see which weapon is the best suited for your current situation.

The second half of the game picks up significantly with more enemies than before and showers of bullets with barrier power-ups becoming increasingly rare. While I welcome a challenge I found it starts to veer into unfair territory. The beginning of Round 6 features a debris field that has rocks that are near impossible to distinguish from the ones that can actually hit you. Round 7 is one long series of traps and sudden shifts that seem to exist to kill you abruptly with prior warning. The learning curve is pretty steep and you’ll have to replay the last levels numerous times to memorize every element in order to survive.

Eliminate Down is utterly fantastic in the art department, able to match some of the system’s best with ease. While a lot of the creature designs (especially the bosses) are reminiscent of similar titles such as Mega Turrican and R-Type the game has a level of detail that few can match. A good chunk of space was reserved for sprite animation and in this regard the game is fantastic. There are many larger enemies and bosses composed of multiple sprites that all animate in a way that is exquisite. There are even rotational effects along the lines of Gunstar Heroes and other Treasure games, all from an unknown developer. Pretty incredible isn’t it? The backgrounds themselves can be underwhelming at times; there are some static backdrops that just scream for some scrolling but on the whole it nearly reaches the level of Lightening Force. The one negative would be the heavy amounts of flicker which I’m surprised isn’t worse all things considered.

There’s no question Eliminate Down is one of the best shooters of the 16-bit era but unfortunately it will cost you. The original Japanese release was printed in low quantities however the game is readily available in Korean and much cheaper. All of the game’s text is already in English so there is no reason not to experience one of the genre’s best representatives. It rarely got better than this.