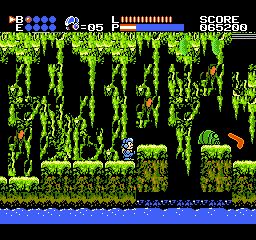 A long time ago Japan would get the better versions of most games simply by virtue of the fact that the games originally came from there. Many things can and will change during localization however back in the 80s that undeniable fact was taken to the extreme. Sometimes a license has to be stripped (Tokkyū Shirei Solbrain became Shatterhand) or sometimes what are supposed to be innocent changes completely ruin a game, epitomized by the changes made to Mad City when it became the Adventures of Bayou Billy. Very rarely did the opposite ever apply.

But when it did boy was it sweet. Such was the case with Power Blazer. Power Blazer was a blatant Mega Man rip-off except instead of the Mega Buster you had a fairly useless boomerang. It’s kind of surprising just how bad the game is considering it came from Natsume, who were on fire with their NES action titles. Taito wisely salvaged the few good ideas the game had and drastically redesigned it when it was released as Power Blade over here. It is almost an entirely different game and is all the better for it. Power Blazer shows what a lack of polish and tuning at the end of development results in as the game is full of many smaller flaws that completely ruin the game altogether.

There’s really no getting around it; Power Blazer wants to be Mega Man so bad. Your hero resembles a squatter version of the Blue Bomber and even comes equipped with a similar helmet. There’s a stage select although the order you tackle the levels does not matter since you aren’t collecting new powers. Some of the enemies even look as though they were ripped straight from Capcom’s archives.

The crucial difference comes in the manner of attack with a boomerang as the weapon of choice. The game uses a charging system like Astyanax where the power and range of your attack is determined by a meter. By default the range on your boomerang is incredibly short and it can’t pierce through enemies but there are power-ups to fix both of these flaws. Unlike Power Blade there is no time limit so you can farm items in one area until you are fully powered up but that is a laborious process as the game is stingy with items drops.

Similar games have used this exact system of charging attacks however they nailed the execution and it is here that Power Blazer fails. The enemies are simply too strong, requiring multiple full power hits to destroy. Since you are mostly fighting in cramped corridors they are often right in your face where you don’t have the luxury of waiting for the power meter to fill. Since the boomerang reflects off enemies after a single hit unless you’ve gained a specific item attacking from a distance isn’t as effective as it should be. This is an area Taito definitely improved on when they brought the game to the US as item drops are more frequent and you can throw multiple boomerangs at once and in multiple directions.

The controls aren’t as responsive as they need to be with the game ignoring your button inputs left. Simply jumping and grabbing a ladder should not be this frustrating. Collision detection is all over the place and the areas in which you need to jump on disappearing blocks (like a certain other game) are an exercise in frustration.   The platforming involves precise timing, to the point where you need to be at the very end of a ledge and about to fall off to make the jumps. These are the types of flaws that are ironed out by expert directors which this game clearly lacked.

All of the game’s flaws combined make the game unfairly difficult. The boomerang’s mechanics mean you’ll take many unavoidable cheap shots. I also found some of the enemy placement suspect. Energy tanks make this somewhat bearable but these are in short supply. Trying to farm items can often take close to 10 minutes before anything drops at which point I’m sure most will give up. Oddly enough if you can actually survive and reach the end level bosses they are a cakewalk. Their patterns are deductible in seconds and they never deviate. Plus there are passwords to record progress.

Graphically Power Blazer is incredibly detailed and looks far better than many similar titles for the system. The game employs a cartoonier aesthetic than the more serious tone introduced in Power Blade as evidenced by the squat, goofy looking protagonist. There are an even mix of highly technological environments mixed with the organic that all wouldn’t look out of place in a Mega Man game. The MM connection doesn’t just stop there however as there are enemies that are near identical as well. This is just as blatant as Krion Conquest although that game at least had the witch theme going for it. About half of the stages here were heavily redesigned in Power Blade but the bosses are exactly the same. The game’s music is similarly fantastic which makes the gameplay flaws all the more tragic since the production values are so top notch.

Power Blazer could have and should have been a much better game than what was released. With a few minor tweaks it could have been something special as Power Blade has shown. It isn’t completely worthless but it is more of a chore to play than it should be.