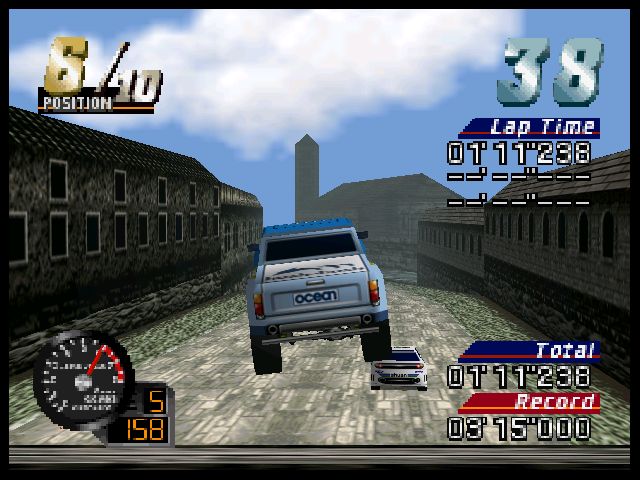 During the Nintendo 64’s first year on the market new releases were incredibly sparse and as such each and every game was scrutinized. It didn’t take a genius to figure out that War Gods was terrible while an unknown (at least in video games) quantity like Turok stood out more due to a lack of competition. Multi Racing Championship was notable as the first “serious” racing game for the system (the assy port of Cruisin USA deserves to be forgotten) outside of Wave Race and Mario Kart 64. Its influence from Ridge Racer and Sega Rally were immediately apparent and the game is similarly structured which means it has a solid foundation but is also painfully generic. Far better games would soon follow shortly after leaving MRC a relic of the past.

The three tracks correspond to easy, medium, and hard difficulty and are incredibly well designed. Seaside, Mountain, and Downtown are long courses full of shortcuts and hidden paths to discover. Don’t let the names fool you as each contains numerous different elements, from muddy dirt paths to even snow. Though there are a number of off-road elements in the game there are very few crashes, hills, and jumps. The game is pretty straightforward in that regard, not that it’s a bad thing.

There are 10 vehicles total to choose from with some hidden. The cars are broken down into two categories: road cars and off-road vehicles such as trucks and buggies. The game’s handling is incredibly tight and with some practice you’ll be powersliding around corners in no time. If you aren’t satisfied with the default setting for each car you can tweak up to seven categories to get the right feel you are looking for, with the free run mode enabling you to test your adjustments out. I found the off-road vehicles had a clear advantage when compared to their more traditional counterparts as every track has numerous segments where four wheel drive is simply indispensable. The Downtown course is nearly impossible with the standard settings of any vehicle as there are far too many U-turns and such to navigate while still maintaining your position.

The heavy focus on the handling and controls does highlight one of the major problems with the game; the complete lack of any challenge from the AI opponents. They don’t aggressively jockey for position or try to ram you into a guard rail, they are simply…there. The real challenge is you against the terrain and the clock which doesn’t feel as satisfying but that is my own personal gripe.

Like most racing games of that era MRC suffers from a dearth of content. With just 3 tracks you will have seen 90% of what the game has to offer in a little over an hour. The only unlockables are new cars, a match mode and mirrored tracks which are no substitute for brand new courses no matter how well designed they might appear. The varying weather conditions don’t alleviate this either. The game simply doesn’t have the substance needed to keep anyone’s attention for more than an hour. This was true back in 1997 and is even more so now.

MRC wasn’t the biggest stunner graphically when released but at the least it looked better than the average racing title on the market. The textures are above average for that year and full of variety though slightly blurry. There are plenty of details that add to the atmosphere such as working headlights when in tunnels and the subtle shift from day to night on the longer courses. The only oddity when it comes to the graphics is the ethereal haze that is always permanently in the distance, like someone is having a massive cookout on every track. I suppose it looks better than the typical gray fog that was usually used to hide pop-up but it really sticks out and is unnecessary as the smart track design manages to hide it really well.

The game’s techno soundtrack is surprisingly good for the system and indicative of the music that was popular with racing games at the time. While not up to the level of Namco’s offerings it is not ear bleeding bad like San Francisco Rush.

There’s nothing wrong with MRC so much as it is strictly average. It followed the racing template set up by the likes of Ridge Racer and Daytona to a tee and is incredibly generic as a result. There were far better racing games from that generation that were just all around superior in every category that you should spend your money on rather than this.