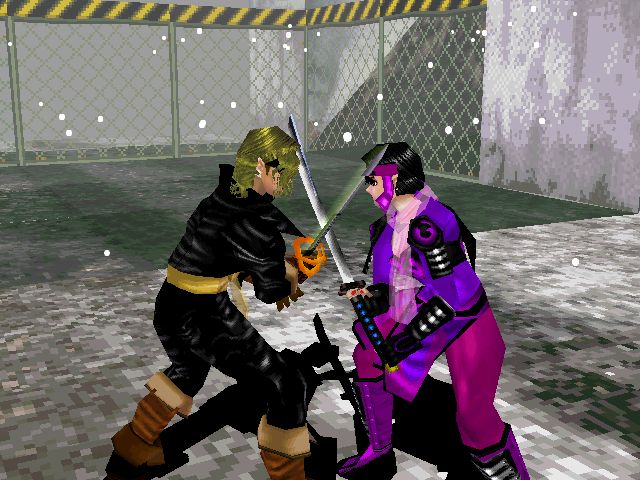 When gaming fully embraced 3d with the dawning of the 32-bit platforms nearly every genre went through a renaissance period of seemingly infinite possibilities now that their 2d boundaries had been shattered. Platformers, first person shooters, and racing games saw the most benefit and while games like Tekken and Virtua Fighter showed some of the benefits of 3d they were still fought on a 2d plane. Bushido Blade would be the game that fully explored what three dimensional graphics could bring to the genre and is one of the most innovative games of all time. While round around the edges its premise is still able to shine through and it is still one of the better games in the PlayStation library.

The order of assassins known as Kage has fallen on hard times. Once an honorable group that followed the ways of Bushido it has fallen into despair under the rule of its new leader Hanzaki. One day a member of Kage decides to leave with their secrets which is strictly forbidden and is hunted down by his fellow assassins before they can leave the compound.

The game’s six assassins have a choice between eight weapons, all differing in size, weight, and power.   These range from the short and fast rapier, mid-sized saber, to the heavier broadsword and sledgehammer. How effective each weapon is depends on the character; naturally the taller and more muscular protagonists can wield the Naginata and broadsword more gracefully than a small fry like Tatsumi. It’s fun to play around with combinations and to make the odd matchups work but in the end everyone has at least two weapons that they are most effective with.

There are a wide range of special moves available to each weapon and that depth goes even further depending on your stance. You can switch between three stances at any time from high, middle and low. Certain stances work better against particular weapons, enabling you to parry blows better and attack vital spots easier. Identifying this and adjusting accordingly is part of what makes the game so visceral. You won’t have much use for it in single player but in multiplayer and Slash mode it’s crucial.

Throw all of your preconceived ideas about what a fighting game entails as Bushido Blade uses none of it. There are no life bars, no time limit or even anything resembling a round structure. Every match boils down to two armed combatants on a battleground and that’s it. Like in real life a match in Bushido Blade can last well over twenty minutes or end within the first few seconds of combat. A battle is decided once a decisive blow to the head or torso is delivered. The tension that this creates is palpable and one of the game’s greatest assets since it is possible to come back from behind even if your body has been cut up into a useless mess. Think of it as both fighters having only a sliver of health in the final moments of a round in a traditional fighting game. That is Bushido Blade all the time.

As you slash at your opponent well placed strikes will disable parts of their body, rendering them useless. It is incredibly satisfying to cut their legs and watch as they hobble over to you to fleetingly try to wrest victory from seeming defeat. But strangely enough it isn’t possible to incapacitate their sword arm and leave them defenseless.

The Bushido in the title isn’t just a cool word. Following the code of bushido is the only way to see each character’s FMV ending, which means you can’t attack while your opponent is down, don’t attack while they are running away, don’t use dirty tactics such as throwing dirt or other items when down, and most importantly, don’t attack while your enemy is speaking. It sounds restrictive but is really easy to follow aside from sadists who want to dismember a corpse on the ground.

Aside from the story mode and multiplayer there is a first person mode, which, while innovative was too much for me to wrap my brain around. Good idea in theory but not very fun in practice. Slash mode pits you against 100 random assassins, all of them wielding different weapons and stances. It is a perfect way to learn the nuances of the game’s mechanics as long as you can stay alive long enough to face off against its varied opponents since there is no way to recover.

Despite how fun the game is it the lack of content compared to other titles in the genre can’t be ignored. There are only 6 characters initially and while it is fun to play around with different weapon combinations most will stumble upon the ones that work for each fighter and stick with that. The story mode can be breezed through in under 10 minutes with each character and there is only one more unlockable but that requires surviving 100 opponents in Slash mode, no small task. Multiplayer is where you’ll get the most out of the game but the lack of characters and weapons gives the game an even shorter life than your average fighting game.

It is admirable what developer Lightweight were able to achieve with the PlayStation hardware but this is a game that definitely would have benefited from more powerful hardware. The character design is well done but the character models aren’t the greatest even by early 3d standards with plenty of clipping, misshapen bodies and weird animation. The entire compound is available to fight in at any time but there is a loading pause when moving to a new area. When compared to Soul Blade it is lacking but considering the game’s scope the developers should be commended for managing to bring all of the game’s disparate elements together into a package that works.

The brilliance of the game’s concept and execution can’t be denied. Bushido Blade was a breath of fresh air in the fighting category and one that is still fun today. The lack of core content hurts its longevity but that does little to diminish the game’s impact. It’s also a sight better than the absolute crap that followed after unfortunately.