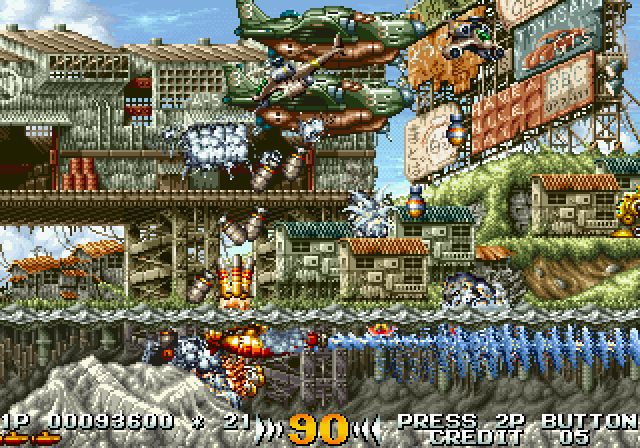 Launch window games are usually shallow affairs designed to dazzle you with new technology to hide their lack of inspired gameplay. There are exceptions of course; many of the early PlayStation games such as Twisted Metal and Wipeout were incredible. But in that rush to make everything in 3d plenty of 2d games were lost in the shuffle. In the Hunt was a port of a little known arcade game from 1993 that came years after the heyday of the shooter. Don’t let that stop you however as it is one of the more innovative games in the genre and is still excellent today.

Despite being a shooter In the Hunt has more in common with side scrolling action games like Contra, often being referred to as Metal Sub. The screen doesn’t auto scroll and instead advances when you move. It’s different but works since you control the pace. Overall this is a slower paced game than most shooters but the pacing is deliberate; despite the timer there really is no rush and in fact that is an easy way to a quick death.

Your sub is equipped with torpedoes, slower depth charges to deal with enemies below (like Gradius) and missiles when you come up to the surface. A nice addition to the home ports is a button to launch all three simultaneously. There are few power-ups with the two carriers cycling through two weapons that alter your torpedoes and missiles. The varying missiles behave differently depending on where they are launched; on the surface the floating mines become a machine gun. Underwater the tracking missiles are simply regular projectiles. Torpedoes are more varied as you have a choice between crackers that explode on impact, a piercing hypersonic bullet, or the faster supersonic torpedoes.

Unlike most shooters you are attacked on three fronts, above, below and in front. The more wide open levels offer plenty of opportunities to pick a lane and stick to it although that isn’t always advise; sticking to the ocean bottom means airplanes and ships and their bombs are left unchecked and can route you. It is almost impossible to cover all three directions, and those who can prioritize stand the best chance of actually seeing the end of the game. The level design is incredibly varied as most of the game’s six stages present a plenty of creative scenarios that limit your abilities in interesting ways. Stage 3 is an upward climb out of a tunnel as a rocky sea monster follows in pursuit. This same creature is the end level boss in which you must strategically drop stone slabs to destroy his body while also avoiding being crushed as well. The Channel takes place entirely in shallow water, cutting off an underwater escape to avoid enemy fire.

Like most Irem shooters In the Hunt is ridiculously difficult. Regardless of the difficulty level it is only a matter of time before you are overwhelmed by the sheer chaos on screen. The sub moves far slower than in most shooters and there are no power-ups to increase your speed so you have to make do. Dodging projectiles or explosions comes down to moving ahead of time which isn’t always an option. The three weapons don’t increase your firepower as much as you would like so survival still mostly comes down to your piloting skills. But amazingly no matter how unfair it may seem once you’ve been through a stage more than likely you’ll be able to clear it on subsequent runs without dying.

The game was ported to both the PlayStation and Saturn and the differences between the two are minor. The Saturn version has a terrible CG intro and more slowdown than the arcade but only in the most extreme cases. The PS One game is the most balanced gameplay wise.   There is less slowdown than both other versions of the game and if you play in the exclusive PlayStation mode you have access to a new power-up that gives you a shield. It might seem like a minor addition but it is actually huge. The level order is different but that is a minor complaint. Only the biggest purists will complain and honestly I doubt most have even played this in the arcade anyway.

In the Hunt is a ridiculously beautiful game, animated to a degree most modern 2d games still have yet to match. Every individual depth charge and explosion is rendered in exquisite detail, to the point where you’ll probably destroy stuff just to see it explode in a shower of debris. Background elements and enemy subs erode and decay over time into a jumble of individual pieces; the level of detail here is meticulous to a fault with so much going on at once that it is almost overwhelming. The underwater theme would seem to limit the variety of environments but that isn’t the case; the amount of variety on display from one stage to the next is insane, from the first stage’s icy South Pole to the submerged city of stage four. The game’s bosses are a collection of gargantuan ships and undersea creatures that nearly fill the screen and are at times more visually impressive than the stages themselves. The game’s beautiful artwork was created by many of the same artists who would go on to form Nazca and create Metal Slug which explains the similar look between the two games.

This is still one of the most unique shooters created and regardless of which version you buy you’ll have a blast. Though incredibly difficult the beyond beautiful artwork will surely keep you coming back.