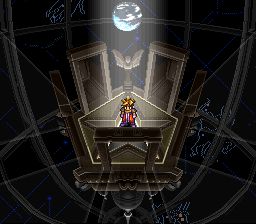 We should have received Terranigma in America. The localization was complete however Enix had already closed their US office, thanks in no small part to their oddball decisions on what games to bring to America. Robotrek, 7th Saga, and E.V.O. instead of Dragon Quest? Yeah. However the game oddly enough was picked up by Nintendo of Europe but not their US counterpart, shame on them. RPG fans back in the day were familiar with Quintet’s work even if they had never heard of the developer themselves. Actraiser, Soulbazer, and Illusion of Gaia are all excellent games that share a similar theme of rebuilding the world and guiding the people. Terranigma was the final game in their loose trilogy and the greatest, taking all of the ideas they had previously explored to their nadir. It is one of the best action RPGs of the 16-bit era and one that desperately needs to be re-released.

Thousands of years ago war raged between the Light and Dark sides of the planet. This war ravaged the world, leaving only a mirror image in its place, the Underworld. Terranigma begins in the village of Crysta, the only pocket of humanity left. Ark is a young mischievous lad who can’t seem to stay out of trouble. His penchant for trouble dooms nearly everyone when opens a mysterious forbidden door and the village is frozen. The Village elder, the only one unaffected, instructs Ark that he has to conquer the five towers in the area that will not only free the people but also revive the continents of the upper world. Since he is the one that set these events in motion it is also his task to guide the upper world to self-sufficiency.

The game’s plot combines the sense of discovery and adventure present in Illusion of Gaia with the world building of Soul Blazer and takes the themes present in all of Quintet’s past works to its fullest extent. While the main cast of characters is kept fairly small there is plenty of room for growth and the story has many poignant moments and twists. It loses the intricate character relationships of IoG but gains a much grander story in the process, one that I can’t really say I enjoyed more but is just as good. The only negative I can legitimately bring up is that the story doesn’t pick up until the latter half of the game but it does so brilliantly, bringing together all of the smaller tasks you have accomplished to show how big of an impact you have had on the world.

Controlling Ark is a joy as he is an incredibly nimble protagonist. All of your weapons are variations on a spear and you are equipped with plenty of attack techniques to keep combat from becoming boring. Most of these moves will come in to play at some point as some enemies can only be damaged by certain attacks. Two particular techniques however, the Middle Slicer (the RPG equivalent of Bison’s Pyscho Crusher) and the Rush Attack are so overpowered you can probably cheese your way through most of the game with just those two. Magic is also available for purchase using prime blues, crystals scattered all around the world. While most of the spells aren’t as powerful as your standard attacks healing, and warping out of dungeons is indispensable. Plus they are animated beautifully.

This is a far more nonlinear adventure than Illusion of Gaia and is more in line with Soul Blazer. As you venture out into the world reawakening the plants, animals, and finally humans there are plenty of side areas not visible on the world map to discover. Once you’ve reached Chapter 3 and humans have populated the world the game truly opens up. You can simply follow the guided path to the end of the game or engage in numerous side activities that truly take guiding humanity to heart as you help various people around the world make landmark discoveries such as electricity, the invention of the camera, various food items and such and trade them around the world. These undertakings aren’t just a checklist either; as you spread these technologies and culture to different countries villages will prosper and grow in size, becoming more modern and offering new items in return. This is the full realization of the theme of death and rebirth prevalent in nearly of Quintet’s games and the fact that you have control over how deep you delve into this element is wonderful.

The game makes use of an experience based leveling system rather than the static stat growth of its predecessor. This works great in that the boosts in strength with each level are pretty significant and will always keep you on even footing with enemies and bosses. It’s also evenly paced so you’ll never have to grind outside of one specific point. In Sylvan Castle the boss Bloody Mary is vastly overpowered compared to the level 90% of players will be (about 21 or 22), to the point your attacks will only inflict 4-5 damage. Your only options are to buy as many elec rings as possible and pray or grind to level 26 or 27. This is so out of place compared to the rest of the game that it bears mentioning.

Terranigma is an exceptionally pretty game and fitting to sit beside other last generation Super NES efforts like Chronotrigger and Seiken Densetsu 3. While not as full of special effects as other titles released in that period the artwork is excellent and what few effects they do employ such as transparencies and Mode 7 are used to great effect. The underworld uses double Mode 7 to mirror the surface on its ceiling and the effect is still amazing to see in motion today. There are some uneven elements to the graphics such as the heavy recycling of forests and caves towards the end. The more fantastical environments are visually inspired while the game’s realistic settings once you reach Chapter 3 lack that same visual flair. The one consistent visual stand out are the bosses, large multi-jointed monstrosities

The soundtrack is absolutely phenomenal, encompassing a wide range of themes throughout the course of the adventure that are always fitting. While there aren’t as many stand out tracks like your typical Final Fantasy or even Illusion of Gaia as a whole it is generally excellent. Like many of their prior titles some of the sound effects are carried over from Actraiser but it is not something I would hold against the game.

At this point there really is no reason why Terranigma hasn’t officially been released on the Virtual Console or as a port to the 3DS. This is one of the best SNES action RPGs period and one that any fan of the genre should play.