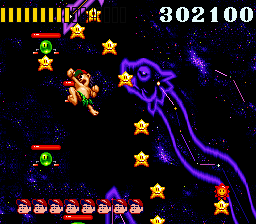 It’s amazing what a graphical face lift can do for a game.  I was never fond of the Adventure Island games on NES or their Master System counterpart, Wonder Boy (the whole lineage between the two will break your brain trust me).  However when the series made its 16-bit debut on the SNES it made me a fan due to its overall presentation.

Super Adventure Island was released in 1992 by Hudson.  While enjoying a date with his girlfriend Tina an evil sorcerer turns her to stone.  It’s up to Master Higgins to defeat the wizard and change her back.  Super Adventure Island was released in between parts 2 and 3 on NES and as such removes some features from both games while at the same time adding its own for its 16-bit makeover.

As Master Higgins you travel through 5 levels, comprised of 3 stages and a boss fight at the end.  Like prior games in the series, 1 hit means death unless you are riding the skateboard meaning you’ll have to be extra careful as you go.  The standard club can be upgraded to triple clubs or the more versatile boomerang.  A super jump has been added to Higgins’ arsenal to traverse the vertical levels faster and make the more tricky jumps.  There isn’t a timer per se, but the bar at the top of the screen serves the same function and can be replenished by eating fruit (I never understood that,  does Master Higgins have diabetes?).

While it comes across a bit simple the difficulty curve is actually finely tuned.  The initial levels are simple enough and give you time to acclimate to the game’s mechanics while steadily adding new challenges every level.  By Chapter 3, you’ll face enemies that dart in from the front and back and will have to look before you leap more often than not.  There are a decent spread of horizontal and vertical levels that present their own unique challenges and switch up the place.  You’ll actually change weapons willingly depending on the situation, something that I almost never did in prior installments.

For the most part though, due to its short length and tuning the game is a bit easy.  Most levels last about 2-3 minutes at most and although there are 20 the experience won’t last that long.    In prior installments there was a constant sense of urgency due to the “timer” ticking pretty fast; that fear doesn’t exist here since there is ample fruit to replenish the meter.  You can inch forward and force the enemies to appear, removing any surprises.

Hudson really rolled out the red carpet when it came to the game’s presentation.  The graphics literally pop off the screen with a vibrancy of color most SNES games around the time of its release could match.  It’s bigger, badder, and better in every way.  It is a bit inconsistent at times, with flat backdrops and ugly color choices at times.  The Mode 7 effects were very clearly tacked on and unnecessary but nearly every 16-bit developer is guilty of it too.  The real star of the show however is the soundtrack.  I’ve mentioned it many times but it bears repeating: Yuzo Koshiro was a machine during the 16-bit era, with Super Adventure Island displaying his insane range.  Hip hop, reggae, rnb, and island themes comprise the soundtrack and match the visual aesthetic perfectly.  You rarely get a soundtrack this eclectic, let alone put together so well.

This is a still a decent action romp despite its age.  The soundtrack is timeless and the gameplay holds up well.  Despite the improvements made in later installments this is still one of the best games in the  series and worth a few hours of entertainment.