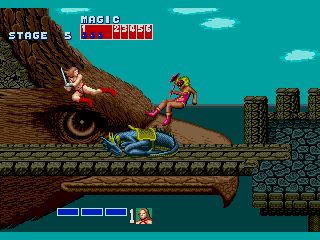 When I look back on it I was pretty fortunate during my youth.  I had a friend whose older brother bought a Genesis near its release and proceeded to buy nearly every new game for the first year.   For a 9 year old it’s absolutely mind blowing getting to experience a new console and all it has to offer so early.  While many of those early Genesis games were terrible, there were a few that were showed off the system’s prowess, with Golden Axe being one of them.

Golden Axe was released in arcades in 1988, with home ports to follow in the ensuing years.  Obviously inspired by Conan (seriously, the heroes wouldn’t look out of place in a Frank Frazetta or Boris Vallejo art book), it tells the tale of a land named Yuria, which has been taken over by Death Adder.   He has kidnapped the Royal family as well as the legendary Golden Axe and only 3 warriors are brave enough to face him, each one in some way affected by his actions personally.  Ax Battler (who doesn’t wield an axe ironically), Gillius Thunderhead, and Tyris Flare are the land’s only hope.

A beat em up in a fantasy setting, Golden Axe has you traveling across many imaginative landscapes on the way to your duel with Death Adder.  Your standard attacks are complimented by magic, with each character proficient in a different element.  Magic as well as life are gained from the midget thieves who scour each level, as well as between stages.  Various steeds named Bizarrians can be procured from enemies to kill enemies faster as well as break the monotony.  The Genesis version was a very faithful port, with only slight downgrades in terms of graphics and sound.  Oddly enough, that faithfulness also turns out to be one of the game’s biggest strengths.

In the arcade Golden Axe was not very long, comprising only six stages.   In addition, each stage was only about 3 screens long.  Most home ports of arcade games would increase the duration of the levels or add more enemies, but Sega preserved its arcade roots and it works out for the best.  The repetition and monotony that kill most beat em ups is largely avoided here; you never face too many waves of enemies and each of the gameplay elements such as magic or riding beasts is given ample representation in the game.  Sega did add 2 more levels as well as a bullshit final boss fight that will make you rage but I guess it’s better than nothing.

Considering how early it was released, this stands up to the arcade game pretty well, with the animation and color taking the biggest hits.  I had never seen its arcade big brother so that detail was lost one me;  the spell effects were ridiculously pretty and that’s all that mattered to me.  In addition to the 2 levels, Beginner mode and Duel were added, giving gamers a shorter run through the game as well as increasingly challenging fights against monsters respectively.  This was very much a port full of compromises; for every element removed something else was added.

Does it still hold up today?  To a certain degree, yes.  It isn’t so long that it gets boring while at the same time offers enough unique elements to distinguish it from the rest of the genre.  One thing is for sure, it’s a far better game than its pathetic sequels.