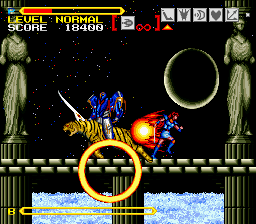 Time certainly can be cruel.  I remember Valis as a kick butt series of action games for each platform they graced.  However as time passed and the bar was raised they were simply competent in the face of such classics as Earthworm Jim, Gunstar Heroes, etc.  While Valis IV is one of the stronger entries in the series it is still only a solid game at best.

Enjoy, cuz that’s about all you’ll get.  Disappointing.

Super Valis IV was released by Atlus in 1992.  Prior heroine Yuko has moved on and become the goddess of the Vecanti world, leaving a new protagonist to take up her sword.  Lena, the new Valis warrior, has little time to adjust when King Gallagher takes over the world, leaving her the only one to stop him.  A port of the import PC Engine CD version Super Valis IV was unfortunately mangled in the process and is inferior to its original and creates some problems of its own due to the changes.  It isn’t an outright bad game or anything but they could certainly have done a better job when converting the game to the SNES; the system is capable of better.

The standard projectile attack is decently powerful but for extra punch you can collect a large arsenal of spells to compliment your primary attack.  These spells range from force waves, 3-way fire, to extra armor and health.  Unlike the original game they are not governed by a magic meter but instead have a limited number of charges you can increase and you can hold up to six at a time.

Although there isn’t a time limit, there is an energy bar in the corner, representing the boss’s life.  The longer you take the higher it gets, also increasing their power and number of attacks.  For the most part you’ll have enough time to accrue weapons in preparation for the battle to come. That does end up creating a problem in the long run though: the bosses and later stages are absolutely brutal.  Although there are only 6 or 7 levels they are long as hell, and unless you rush through each the bosses will become absolute monsters by the time you reach them.  And even that isn’t possible because of the number of enemies and how many hits it takes to kill them.  Blindly running into danger is a recipe for disaster.  By the end of the game the bosses are so hard that it requires near perfect execution to win.  Dying sends you back to the beginning of a level so thankfully you have unlimited continues but that is little consolation.

A number of cuts were made in the porting process, all of them unnecessary.  2 of the playable characters were removed; come on, even the Genesis version of Valis 3 kept all 3 characters.  This robs the game of some much needed variety.   A new level, Castle Vanity, was added but when you’ve chopped so many out of the game that’s little consolation.  All of the cutscenes were eliminated as well, a fact that is evident at the end of each level when it tells you where Lena is headed next without any context.  The cutscenes were a staple of the series going back to the first game; that’s like releasing a new Ninja Gaiden without the cut scenes to move the story along, blasphemous.

While it isn’t the prettiest game Valis IV does still impress at times.  The environments border on fantastic and the boss designs are Japanese character design at its finest.  What is phenomenal though is the soundtrack.  An eclectic mix of somber tunes and more upbeat action game music punctuate the action and at least make trucking through the game somewhat enjoyable.