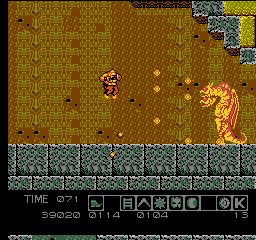 What an odd little game.  Karnov was Data East’s mascot, appearing in a few of his own games and cameo appearances in their Fighter’s History series.  How they decided a fat Russian strongman would be the mascot for a Japanese company we’ll probably never know however the game he starred in is a pretty decent action platformer.

Originally released in the arcade in 1987 Karnov was ported to the NES in 1988.  A weird collage of different elements there is no story, at least in the US version.  You are simply Karnov and you travel through 9 levels to fight the final boss, a three headed dragon.  Why?  You don’t need to know, that’s just what heroes do.  This is funny considering in most of his other appearances he is more often portrayed as a villain.

Your primary form of attack is the ability to breathe fire.  Initially a single stream it can be upgraded to 3 times that, creating a wide berth that covers most of the area in front of you.  If you have a turbo controller then you can really let loose and decimate everything in your path.  Unlike the arcade version you can take 2 hits before death, alleviating some of the pain of cheap deaths.  Why you turn blue when hit I can’t say, but then again maybe I’m over thinking it, I mean you’re a fat dude who breathes fire.

Unlike typical platformers of the day you amass a small amount of items, some that get multiple uses like the ladder and others that are single use, like the boomerang, Jump Boots, and Wings.  There is a wealth of secrets to be found and the game will subtly clue you in with a sound when one is near.  Some items can only be used in these moments so paying attention is necessary.  The levels take you through a variety of environments and it seems like they try to outdo themselves in the strange department.  One level you fight a T-Rex, the next you turn into a mermaid (well merman but mermaid sounds funnier) as you dive into the sea.  If there’s one thing you can say about the game it’s that you never know what to expect next.

Karnov had somewhat of a reputation as being difficult back in the day but to tell you the truth I never understood why.  It could be due to the rigid controls and loose collision detection; your jumps never seem to travel as far as you would like and Karnov drops like a brick after a point. This in conjunction with the way to particular collision means you’ll fool to your death a lot.  It’s also has unfair enemy placement.  There are numerous instances where enemies will sprout out of thin air and infinitely respawn if you don’t move.  But even despite these issues I can remember finishing the game the same day we bought it back then.  Maybe I was just a savant when it came to 8-bit games?

A solid but unspectacular debut for Data East’s mascot Karnov will provide a few hours of entertainment should you seek it out.  And this is probably the only game where he does anything remotely heroic, after this he’s pretty much a bastard in all of his guest appearances.