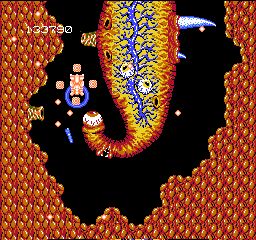 I don’t think I’ve ever met a single human being who has ever played Abadox.  Talk about flying under the radar.  There are very few reviews of the game on the internet as well.  Which is a shame as it is one of the better shmups for the NES and only suffers from a very steep difficulty curve and being a little too derivative.

In the distant future the planet Abadox is eaten (!) by an alien organism known as Parasitis.  Like an organic Unicron Parasitis takes on the characteristics of whatever it eats and in this case its body becomes the new Abadox.  With their military in shambles one lone Lieutenant is sent to destroy it from the inside.  Artistically accomplished with the gameplay to match how Abadox went unknown is a mystery.  I can even remember a commercial advertising it.  But for everything it does right the question becomes whether you have the patience to stick with it as the game can be brutal as hell.

The first thing you’ll notice is Abadox is highly reminiscent of Life Force.  Not just in theme but gameplay as well.   The weapon selection is definitely similar minus the power up bar at the bottom.  The standard shot can be upgraded to 3-Way fire, Laser, Ripple, and Spread Gun and are complimented by missiles and possible 4 way shield.  Like most shmups if you die you lose everything and are tossed back to a checkpoint, which is pretty much the kiss of death.  Levels 2, 4, & 6 are vertical scrolling like, you guessed it, Life Force except this time you are moving down the intestinal tract.  How’s that for a change of pace?

Extremely fast paced and relentless in its assault few will see the end of Abadox.  Eschewing the cheap tactics of other shooters there are no teleporting enemies, just a shit ton thrown at you at once.  In some ways it resembles an early form of bullet hell.  The level design is excellent but comes down to intense trial and error; there are plenty of sections where the combination of enemies and the environment will overwhelm you.  Starting back at a checkpoint with no weapons is almost enough to make you quit; if you couldn’t manage when fully powered up how can you possibly survive with just a pea shooter?  But that’s an aspect of shooters that we all have to accept.  When I mentioned Life Force I wasn’t joking.  Not only are there vertical levels and nearly the same weapons but the end of the game has you navigating a maze of walls and traps as you make your escape.  Sound familiar?

Abadox is certainly one of the prettier games on the system.  Although it shares a similar theme it destroys Life Force in terms of graphics.  There’s an interesting menagerie of biological creatures to face as you explore the inner workings of Parasitis’ body.  The bosses, while impressive do kind of feel tossed in for the sake of it.  As an example, the first stage takes place in the mouth but the boss is a giant head with teeth and eyes.  Their designs are pretty amazing however.  By the later stages the biological theme is tossed out the window as you fly through a mechanical world. There’s nothing wrong with that but it is a blatant departure from the game’s overriding theme when compared to the rest of the game.  You’ll notice the sound effects and music sound ripped from a Konami game; a quick check of the credits will point to one Kyouhei Sada, a Konami veteran who composed music for several of their games.  What’s there is good but some of it is deliberately patterned off his past works.

Although it’s imitative Abadox does enough right that it shouldn’t be held against it.  If you like your games hard or just like shooters in general there are few better on the console.