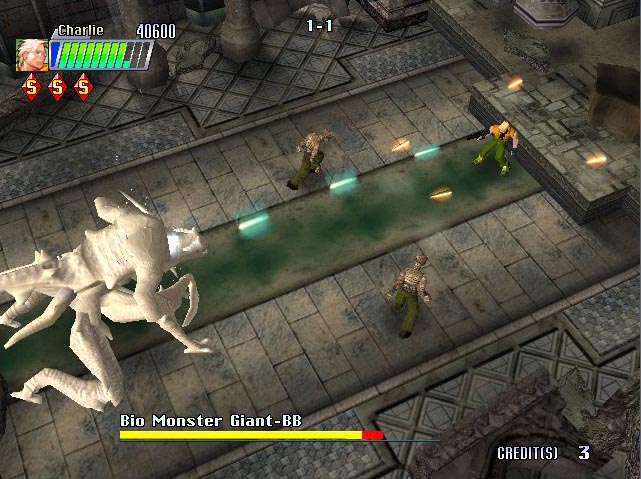 Who doesn’t love fan service?  I’m not talking about the cheap and oftentimes pedo bait that permeates most anime nowadays.  I’m talking about the likes of Super Smash Brothers or Capcom vs. SNK.  Looking back on the Dreamcast library there weren’t too many straight up action games in the Contra mold.  Capcom were damn near a Sega second party in that period and ported everything under the sun including this little known gem that starred a grab bag of Capcom all stars, Cannon Spike.

Originally released in the arcade and running on the Naomi arcade board (basically a Dreamcast with more RAM) it was only a matter of time until it saw a home release.  The story certainly presents an interesting reason to bring these disparate characters together: terrorists have unleashed a swarm of robots around the world and a group of fighters designated the Anti Robot Special Force is outfitted with motorized rollerblades in some form or another to take them out.  Why these specific characters were chosen isn’t important, all you need to know is that the game is dripping with shout outs to numerous other Capcom games and is a thrill ride for the brief period that it lasts.

With 7 characters to pick from there’s one for everyone to love.  Representing a variety of series this is certainly not an ensemble crew.  Charlie and Cammie from Street Fighter, B.B. Hood from Darkstalkers, Mega Man, Arthur from Ghouls & Ghosts, Shiba from Three Wonders (dat old school Capcom knowledge son), and one original creation, Simone round out the cast.  It’s a bit silly to have everyone skating around on roller blades but whatever it doesn’t take away from what makes them unique individually.

While they all possess the same array of weak, heavy and special attacks the range and power behind them make all the difference.  Mega Man’s Tornado Hold is extremely powerful but has a small wind up time which is a detriment in a pinch.  Arthur is the strongest physically but lacks range.  As a bonus their attacks are pulled directly from their respective games so you can expect to chuck Sonic Booms with Charlie and Cannon Drilling with Cammie.  All characters have a default gun of some sort as their standard attack and while the game has a lock-on it’s more or less useless.

But in the long run that doesn’t matter so much.   Similar to Alien Soldier and Gunstar Heroes most levels are basically a series of boss rushes with a smattering of fodder enemies to replenish life and hopefully obtain a few special attack charges.  Honestly they aren’t really levels, more like arenas; think Smash TV with a wider playing field and you get the idea.  Once again the fan service rears its head with some not so blatant call backs.  The graveyard with its undead dogs and zombies is undoubtedly a nod to Resident Evil while Fallen Balrog (they probably left the name unchanged so it wasn’t obvious) is an undead Vega with some sweet moves.  Quick and to the point it wears its arcade lineage like a badge.

Which is part of the reason Cannon Spike stumbles a bit; it’s short.  While you won’t finish it on your first try with its 3 credits it’s a guarantee that in an hour or two the credits will roll.  It’s practically a crime to have crafted such nuanced gameplay only to wrap it around a quest that’s so brief.  Depending on the character the level order changes, taking into account their strengths and weaknesses.  Everyone has their own unique ending, and even the two player coop has its own endings.    Beyond that the only incentive for replay value is the art gallery featuring some sweet work from Kinu Nishimura but as a whole more could have been done to lengthen the experience.

As much as I liked Cannon Spike the $40 price tag at release was a bit much.  However you can find it dirt cheap now and I say jump right in.  This would make a perfect downloadable title for every one of the console downloadable services but I doubt Capcom even remembers this exists.