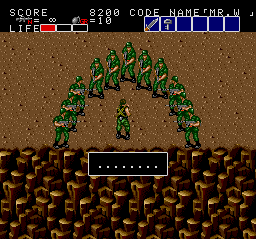 You know when I really think about it the Turbo Grafx-16 didn’t have a wide variety of side scrolling shooters.  Oh there were plenty of shmups, in fact far too damn many if you ask me, but not too many in the Contra mold.  Which is a shame, as the console’s library could have used the variety.  While Bloody Wolf isn’t enough to make gamers weaned on Contra jealous it is a decent run and gunner.

Bloody Wolf was originally released in the arcade by Data East in 1988 and ported in 1990.  As mercenaries Snake and Eagle you are tasked with rescuing the President and any soldiers reported M.I.A.  The home version is a slightly expanded version of the arcade game, with 1 more level and more dialogue that was unfortunately translated badly.

In many ways this is similar to Heavy Barrel or Mercs.  Though side-scrolling you have a wide playing field to maneuver in and you can jump as well.  There is some light platforming but nothing that will make you break your controller in frustration.  Unlike most shooters of the time you have a life bar that can be expanded and it will come in handy.  While Bloody Wolf isn’t the hardest game in the world there are times when things get hectic.  When 8-10 guys with flamethrowers or grenades blitz you you’ll be grateful for that extra health.  You aren’t sent in helpless however; there are a vast array of weapons and items to even the odds.

Most of the secondary weapons are found in crates when rescuing hostages.  One primary and secondary are your limit, and sometimes hard choices need to be made.  Some of the more destructive weapons are not without their drawbacks, such as the rocket launchers slow rate of fire.  In a nod to Metal Gear there are optional items you can find, such as fins to swim faster, keys to open locked crates, or infrared goggles.  None of these are mandatory of course but chances are you’ll find them in your travels and they’ll make life easier.  The only challenging moments in the game come from the boss fights, which will have you blowing through those unlimited continues in record time.  It’s very uneven, in that you’ll rarely find yourself in danger of death no matter how hard the game tries only to be greeted at death’s door frequently by the bosses.

The Turbo Grafx-16 version not only faithfully ports the game but is improved.   I found the graphics to be sharper and more detailed in places and the music tracks loop less often.  The level s have been expanded in size, with the addition of 1 that has you searching for 8 hidden hostages in non linear fashion.  There is more dialogue as well, and while it isn’t as bad as the arcade (you have to see it to believe it) is still engrishy in parts.

Perfectly adequate sums up Bloody Wolf.  There isn’t any one element that stands out and while they tried to make lengthen the experience it’s still very short.  The missing 2-player coop would have at least spiced up the action but sadly it wasn’t meant to be.  I would only consider this only if you’ve exhausted most of the superior action options available on the market.