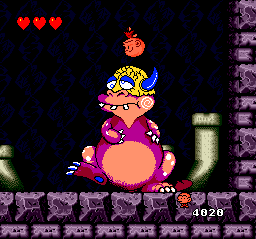 In the great pantheon of console mascots everyone remembers Mario, Sonic, and Crash Bandicoot.  Those are the most obvious, and the ones that achieved the most success out of the glut of platformers that bombarded the market.  But there’s one mascot that is never remembered and forced to sit in the back of the bus.  That would be Bonk, the mascot (somewhat) of the Turbo-Grafx 16.

Bonk’s Adventure was released in 1990, a year after the system had launched.  A bit odd considering he would more or less become the face of the platform in America.  I say somewhat mascot because the game was ported to numerous other consoles, but those ports came long after the original.  Like Mario before him Bonk is out to rescue a princess, this time from the evil King Drool.  Your enemies are anthropomorphic dinosaurs, and you know I never gave it much thought, but although you are a caveman you never encounter any others in the series.  But that’s just me thinking about this too much.

What sets Bonk apart?  Mario has his butt stomp, Sonic has his speed, Bonk has a big fucking head.  Harder than a brick you use it to skull bash any enemy in your way as well as select walls.  You can spin in the air to cross gaps or dive bomb enemies with your head for massive damage.  The wonky hit detection of that attack will piss you off however.  You need to be precise when using it but I think even the developers realized this.  Various fruits and foods populate the levels with most of them only netting you extra points, however some restore your health and are in abundant supply.

Power-ups are few but the ones available make you a walking death machine.  Meat comes in two flavors, large and small and will power you up in 2 stages.  Large meat puts you at maximum power and makes you invincible for a short period of time.  Small meat only does it slightly, giving you the power to freeze everything on screen for a few seconds with a head stomp.  These actually come in abundance, and generally you won’t traverse any one level too long before reaching another if it runs out.

I love the animations in this game.

The power of the TG-16 is put to use in much subtler ways than you would expect.  Although the game has an overall simple look its done on purpose.  The full range of the system’s color palette is on display here with each level exploding in color.  The enemies come in all shapes and sizes with some taking up nearly the whole screen.  The overall animation in the game is incredible, not just on the main character himself.  You’ll see a selection of hilarious hit animations when you attack and when you receive damage.  The bosses are the show stoppers and are where the game starts to deviate from its prehistoric theme.  One is a ninja and one is actually a tank with a dinosaur for a head.  It’s an interesting mish mash to say the least.

It doesn’t revolutionize the genre but what it did it did well.  For its time this stood out as a fine example of the platform genre.   It’s funny that this game predated even Sonic the Hedgehog yet never reached the heights of that franchise.   This was ported to a huge number of systems so pick your poison if you want to give it a try.