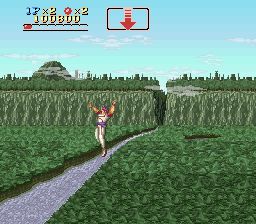 When you think of Atlus more than likely images of the niche RPGs they have published over the years are conjured up.  For the longest time that has been their MO, nabbing games no one else wants and localizing them.  And they’re quite good at it.  Recently they have started to branch out into other genres, and while some think this is a new approach, it’s actually a return to what they used to do during the 8 and 16-bit era.

Run Saber was released in 1993 without much fanfare unfortunately.  In an unspecified number of years in the future the Earth has been ravaged by pollution and low resources.  Fearing for our future a new chemical is created to reverse the damage done to the environment.  Once released into the atmosphere things go horribly wrong when it instead mutates everyone who comes in contact with it, all part of the scientist’s plot to rule the world.  Our last hope rests in the Saber project, genetically enhanced soldiers created to save the world.

Right away you’ll notice this closely resembles Strider.  Like that game you have a Saber (Lightning element for Allen, Ice for Sheena, not that it matters) and can climb almost any surface.  In addition to your standard attack you can slide, dash, and drop kick, and perform a screw attack much like Metroid.  For the times where things get a bit hectic you have a screen clearing “smart bomb” attack.  Despite the range of abilities given, this is more or less Strider for the SNES.  That isn’t a knock against the game, it’s actually a compliment.

Whether its single or 2-player coop the game is piss easy.  Enemies drop power-ups and extra health frequently and you’ll rarely if ever find the screen cluttered with enemies.  Combine this with your overall agility and you can run circles around the enemies before they know what hit them.  You have limited continues but that isn’t even a concern unless you gimp yourself on purpose by setting the difficulty to hard and reducing your life count.  But who the hell does that anyway?

Aside from its lack of any significant challenge Run Saber comes up short in the length department.  There are only 5 stages in total, with none of them overly long.  Right when you start to really enjoy the game’s mechanics it all ends a little too soon.  There are some awesome moments throughout, such as the Mode 7 boss battle at the end of the first stage but these moments are few, leaving only short platforming segments before the next mini boss.  For such a good game it’s a shame that it ends up being so short.  If the game had 1 or 2 more stages it would truly have been a classic.

The graphics, while not exceptional, get the job done.  The color palette for the game is very dull and low-key.  It’s very heavy on the greens and browns.  I guess you could say it complements the game’s theme pretty well but it lacks pizzazz.  When you think of games like Castlevania IV or Actraiser 2 you imagine beautiful vistas and ridiculous special effects.  Here the presentation is very subdued.  The only real standouts in terms of the graphics would be the bosses.  They sport some incredibly creative designs and the game is full of them.  I would say the production values overall sit squarely in the competent department.

That sums the game up perfectly.  Competent.  There is no standout feature that would have gotten the game more acclaim or notice, such as a gameplay mechanic or graphical effects.   All of its constituent parts are done well enough but never cross over into mind blowing territory.  Those seeking an alternative to Strider or more of the same gameplay should definitely look this up.  It isn’t expensive but can be a little hard to find, like most Atlus games.