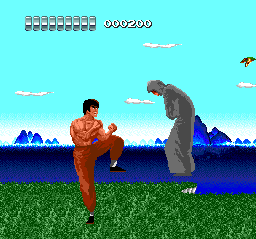 Ah deceptive advertising.  In the video game industry’s nascent youth advertisers knew the vast majority of the gaming populace was little kids.  Young impressionable kids open to the wonders of electronic entertainment.  If it was big and shiny chances are we would at least give it a spin.  Sega did this excellently during the 16-bit era with their bullshit “Blast Processing” marketing campaign.  Yeah, way to show off by comparing Sonic the Hedgehog 2 to Mario Kart.  But I digress.  One of the earliest examples of this I can remember were the commercials for China Warrior.

China Warrior was released in 1989.  Wang is on a mission to defeat the minions of the Dark Emperor and the man himself.  The marketing for the game compared China Warrior to fucking Kung Fu on NES, to make its point that the TG-16 was better than your old NES.  It certainly looked the part, but is China Warrior any good?

You fight on a fixed path that never stops unless you duck and defeat the many enemies that stand in your way.  In addition to the enemies varying obstacles such as rocks, tools, and even parts of the environment are flung in your path.  Due to the size of the sprites everything has a fixed height and path and figuring out how to successfully avoid or attack without getting hit is key.  There’s ebb and flow to the way the stages progress and it can feel very rewarding when you’ve learned the pattern for each level and can reach the boss unscathed.

But that also points to the game’s biggest flaw.  Because the structure is so rigid there is little to no room for deviation; you either play the game exactly the way the designers intended or die.  And it’s boring.  You only have a punch, kick, and jump kick to carry you through the whole game and it gets old fast.  The only real strategy comes from determining exactly what you need to do for each enemy.  The only challenge comes from the boss fights, and even those can be overcome by spamming the attack button.  I can see how they at least tried; nearly every one of the 12 levels introduces some new trap or obstacle but it isn’t enough.

That leaves the graphics to carry the game and they are not as impressive as NEC wanted us to believe.  Sure, the sprites are massive but they animate look wooden blocks and the backgrounds are a static mess.  This is definitely a case of style over substance.

I guess I can see why they compared China Warrior to Kung Fu; they kind of share the same structure and are just as simple.  They aired that commercial aggressively too but even I wasn’t fooled, and I probably still ate glue at the time.  This is not worth anyone’s time.