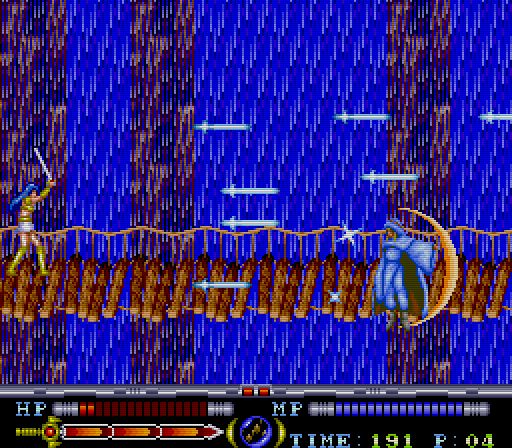 It’s strange; by any metric the Valis series is nothing but a bunch of solid and sometimes below average games yet I love them to death. Maybe that love stems from their uniquely Japanese aesthetic or the fact that they make use of extensive cutscenes which to my teenaged mind was the greatest thing ever. While I was familiar with the Genesis version of the original it would be many years before I would have the chance to play its other 16-bit counterpart. As a port/enhanced remake this is definitely the better of the two titles although that still means it is just solid.

This would actually turn out to be the last console port of the original game, even after the fourth installment. Why Telenet felt the need to go back and remake the game is a mystery but their efforts are welcome. Valis in its original form on the MSX and various Japanese PC formats was an insipid game, even worse than the confusing Famicom installment. The Sega remake was decent for the time but has definitely aged badly and while this version is undoubtedly the best it also suffers the same fate to an extent. While good there are still far better action platformers on the same platform.

Although they share many of the same stage themes and bosses this version of the game is overall quite different from its Sega counterpart. At first glance Yuko seems to control identically to the Genesis game but numerous small improvements have been made that create a smoother experience. The default jump no longer relies on pressing up to gain height and is instead based on how long the button is pressed. Most importantly the slide move has been better integrated into the game with plenty of low ceilings and gaps that require its use to cross. It can also be used to attack. Yuko still runs pretty slowly unfortunately but this is not supposed to be a fast paced game anyway.

This installment in the series is far more focused on combat than platforming with a suitable array of weapons for the task. There are a variety of weapons that produce different projectiles from the Valis sword such as homing arrows, the wide shot and my personal favorite, the sword shot. Collecting the same power-up three times will max out its power for devastating results. New magic spells are learned after defeating each boss although I’ll admit I forgot they were even in the game since you won’t really need them.

I found the difficulty overall to be pretty low. Yuko’s life bar is pretty long and while there are a number of cheap hits to be found life restoring hearts can be found everywhere. The bosses do put up a bit of a fight but their patterns are easy to discern making these encounters fairly routine. The game does not refill your health between levels but that poses little obstacle since it is better to simply die for a fresh start. The levels are a bit sparse compared to your typical action game and only pick up slightly in the latter half. Even then with full power you’ll breeze through this in less than an hour, especially since it is shorter than the other versions.

As an early PC Engine CD Valis has a mild presentation. Yuko and the various enemies she faces are comprised of medium sized sprites. The backgrounds range from pretty detailed to just barely above Famicom level. The lack of any scrolling in these flat backdrops is pretty noticeable but the game’s excellent use of the system’s color palette helps somewhat. Compared to the MSX and PC-88 originals the visual leap is pretty significant as the color palette isn’t a garish nightmare. There is a gratuitous amount of fan service in the game that is pretty surprising. Every time Yuko jumps her dress flies up giving you a full view of her panties. The cinemas also revel in lingering on her body whenever she is getting dressed or changes outfits. Honestly it’s nothing out of the ordinary considering the popularity of anime but is still hilarious to see in action.

The added CD space was definitely put to use in the game’s many cutscenes. The end of every act features a few minutes of animation as the story progresses although the amount and length is surprisingly less than the Genesis game. However all of it is fully voiced. In fact there is a fair amount of voiced dialogue between Yuko and each of the game’s bosses although sadly it is lost on those of us who don’t speak Japanese. The soundtrack is fantastic, with excellent remixes of the cartridge music remastered in redbook audio.

As the original game in the series Mugen Senshi Valis is not an exceptional game by today’s standards and is merely adequate. It isn’t as great as later titles such as Dracula X (then again what is?) but is a very solid second tier release for those looking for more action platforming.