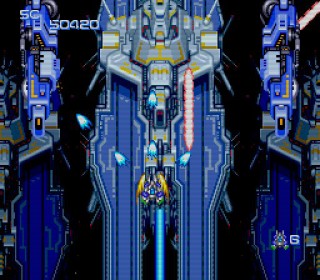 When you have a genre that is as saturated as shooters on a console it is only a matter of time before the games start to blend together. I like a good outer space romp as much as the next man but good god was it run into the ground in the early to mid-90s. Nexzr bears more than a passing resemblance to Hudson’s Star Soldier series and while that would be damning in most cases the game is at least different to stand on its own. While not wholly original it is still a damn good game that is better than most similar titles for the platform.

In the year 2012 Earth comes under attack by a large invading space armada. As the pilot of the Slasher, the most advanced ship on Earth this is not just a matter of saving the world but a mission of revenge. Your female partner was killed by an unknown armored assailant who is part of the alien fleet. The extensive intro might lead you into believing this is a heavily story driven game like Macross 2036 but that isn’t the case. While the introduction is nice don’t expect to see any more cutscenes until the end of the game.

Surprisingly Nexzr is light on weapons and is disappointing in that regard. Your only option with regards to primary fire is a three-way shot that is less powerful than the standard cannon but its wide firing range leaves huge gaps. There’s no sugar coating it, it sucks. Fortunately your secondary options are far more interesting. There are a variety of bombs and missiles that are all effective in their own right. There are homing lasers, crawl missiles which are basically the same as Gradius that explode on impact and my personal favorite, satellites that aggressively seek out enemies and stick to them like glue. Sadly the shooter staple bombs do not make an appearance which makes the game seem a bit simple but this is anything but. While I have my issues with the paltry weapon selection which partly adds to it but at least they are serviceable.

I found this to be a bit different from your average shmup in that smaller cannon fodder enemies don’t appear in great numbers with a greater emphasis placed on larger mecha and capital ships. Nexzr can be a pretty difficult game due to a number of factors. One hit equals death and you’ll only occasionally receive a shield that can absorb one hit. The game isn’t fast paced however there is rarely a moment where something isn’t shooting at you. Most of your deaths will come from some random bullet that you didn’t keep track of. Death means you’re sent back to a checkpoint and sometimes you’ll have to retrace a significant amount of ground. Oddly enough the end level bosses are incredibly easy to the point I was surprised they were over in less than thirty seconds. The mid-level bosses put up more of a fight if you can believe it.

Although the difficulty curve is a bit steep it isn’t insurmountable. The game is challenging but never comes across cheap however which is the ideal. The generous scoring system means you can rack up extra lives pretty quickly so long as you aren’t a scrub. More than likely you’ll blow threw them by stage four at which point the game becomes vicious. I do find it odd how much I enjoyed the game in spite of some of its flaws but I chalk that up to how engaging the game is in the end despite its simplicity.

This is a pretty spectacular looking game which is odd considering how little variety there is in settings. Aside from stage six the game takes place completely in space. Without the diversity that comes from visiting different planets the game’s visuals rely completely on its mechanical designs, which it does in spectacular form. The numerous imperial class ships and enemies bear a strong resemblance to Soldier Blade yet still seem unique. The graphics are bright and almost never slow down which is an accomplishment considering how busy the game gets at times. There are only a few cutscenes but they are long and filled with spoken dialogue that even someone like me with a rudimentary knowledge of Japanese can follow. The CD soundtrack is fantastic, full of hard rock tunes that ebb and flow with the action.

Nexzr is a great addition to the TG-16’s shooter library and while it bears some similarities to a few titles still feels unique. There are two versions of the game that are both expensive; the original release and Nexzr Special, which included a few time attack modes as part of the summer carnival of 1993 competition. You’ll be paying a hefty sum either way but I guarantee you’ll get your money’s worth out of it.