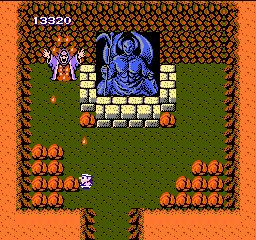 As prolific as Capcom were on the NES there was always bound to be a few games that slipped through the cracks. The early years of their publishing saw a consistent string of arcade ports, almost all completely awesome. That would change with the release of Mega Man and more original titles would become the order of the day. Higemaru Makaijima: Nanatsu no Shima Daibouken was a sequel to one of their first arcade games and on the books for a worldwide release as Makai Island. Though complete it was cancelled but the complete English rom is out there.

As a sequel Makai Island only keeps the general gameplay and theme of the first game as the game is now a sprawling adventure rather than a single screen action puzzle game. In many ways you could say this series was the inspiration for Capcom’s later Goof Troop as the similarities are eerily similar. Makai Island stands out as it was Capcom’s first original title for the NES after allowing Micronics to butcher so many of their arcade ports. It was a nice precursor of what was to come and while it has a few flaws Makai Island is a cool little game.

Momotaro returns and retains the ability to pick up and throw objects in the environment, namely barrels and rocks. Rather than dying in a single hit you now have hit points that can stretch into the thousands. Despite the comparisons to Zelda there really aren’t any items or secondary weapons to help in your quest. Food and other one off items will boost your health but the only other quest items are keys, a lamp to unseal one particular island, and hidden items needed to get the best ending.

The world is pretty large with many islands and ships to explore but this has more in common with Zelda than other nonlinear adventure games. The wide open sea gives off the illusion of an open world which is true to an extent. There are plenty of random pirate ships out on the sea that you can board for a brief action sequence but for the most part the adventure is guided. Nearly every island is locked behind a gate or seal that will be unlocked in a specific order. The seven themed islands are basically Zelda dungeons without the puzzles leaving you free to head straight for the boss if you choose. Good luck with that as each is pretty large.

The game’s one main critical flaw is the lack of any real direction. Once you start you are just a ship in the ocean with no goal or guidance given. Through trial and error eventually you’ll stumble onto the one island you can actually access on the other side of the map but that is a long process. A map like Zelda would have done wonders for navigation since you’ll be forced to draw your own. NPCs give incredibly vague clues to your next destination and when you do actually get a map its at the end of the game. Whose bright idea was that?  The later MSX port had arrows that pointed out your next goal which I really wish were present here. Considering this was a 1987 release it can be excused somewhat as pretty much every developer was still learning though it doesn’t make it less frustrating.

In the early stages of the game things are pretty simple but in short order it gets pretty difficult. The amount of damage enemies inflict increases sharply and if you haven’t been diligent about looking for secrets you can die in seconds. You’ll need to develop some accuracy when chucking objects since your supply is limited to what is in each room. This is especially important during boss battles. Though hard the game is still far more approachable than some of Capcom’s other games in the same period.

The game’s simple visual style belies the great deal of variety that lies underneath. Each island is distinct with its own set of enemies, architecture, and landmarks. Although the pirate theme is ever present the game doesn’t strictly rely on that as there are demons and otherworldly elements thrown in that still feel like they belong. Hebi Island is patterned after Ghosts N Goblins with all of its monsters and its boss taken from that game. It’s a cool homage and if you look close enough there’s even a cameo from Arthur. The only repetitive element would be the pirate ships which all share the same structure and merely reshuffle the layout of their barrels. The musical selection is just as diverse as the islands and fit each perfectly.

Makai Island would have fit in perfectly alongside Zelda and Capcom’s own Section Z as the type of long adventure games you could only get on a home console rather than the quick bite sized action of the arcade. The rest of the world missed out on a cool and ambitious title but that isn’t a factor anymore as the English rom is freely available online.