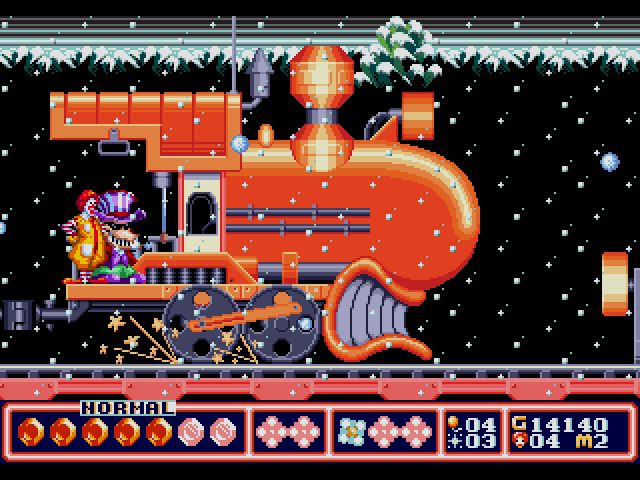 When Treasure exploded on to the scene with Gunstar Heroes they could do no wrong and for the smart gamers who played it I’m sure there was some anticipation as to what they would do next. Considering their pedigree as Konami veterans who had worked on so many of the classics gamers loved it shouldn’t have been so surprising. Even with that in mind I don’t think anyone expected their next title would not only be licensed but star Ronald McDonald. As if that shock wasn’t enough the game is actually pretty damn good! Much like McKids (I can’t help but chuckle at that name) if you look beyond the silly license you’ll find a good game underneath. McDonalds Treasure Land Adventure is a solid game and far better than you would expect given the subject matter and another notch in Treasure’s belt.

One day Ronald McDonald is out for a stroll when he finds a piece of a treasure map. This piques his curiosity and he sets off to find the other three pieces and discover the hidden treasure. Aside from the presence of Ronald, Grimace, and Birdie the Early Bird you’ll be surprised to learn that the game largely ignores its source material, if you can even call it that. This is a standard action platformer and while it is more restrained than your typical Treasure action game that still basically means it’s better than the majority of the mascot trash that littered the shelves during that era. Unfortunately it also comes across as a bit generic; you could just as easily replaced Ronald with another character and there would be no difference.

Ronald is armed with star magic to defeat enemies and a scarf that can be used as a sling to grab hooks, slide down wires, and grapple to higher ledges. The mechanics are simple but the way they are used can be pretty creative at times. The gold you collect can be used in the various shops scattered about to buy jewels to restore health, continues, balloons to save you from pits, and flowers that can absorb a few hits for you. The jewels are occasionally necessary for progress as one of Ronald’s friends will need some before letting you move on. The game throws so many around that it is rarely an issue however.

The game technically only has four stages but each is split up into multiple segments, sometimes as many as 8 or 9. While a lengthier game gives you more entertainment for your dollar the simple play mechanics do mean the levels feel longer than they should. This isn’t like Sonic the Hedgehog where the many situations in which you can apply your speed and stronger level design keep the game interesting. The few boss battles show some ingenuity and will make you wish there were more sprinkled throughout the game. If this were broken up into 6 or 7 stages of shorter length it would be much better.

The major criticism I have is that the game can be a bit too easy which leads to boredom. Considering this is a licensed title it’s understandable that it is targeting as broad an audience as possible but I feel the game is a bit too forgiving. Aside from finding life restoring jewels everywhere the game also practically showers you with hit absorbing flowers. If for some reason that isn’t enough the copious amounts of gold lying everywhere means you can just as easily walk around fully powered cheaply.

I wouldn’t necessarily say it is a flaw but a missed opportunity; the level design is so well done it’s a shame you’ll breeze through it so fast. Towards the end it picks up slightly but most of the challenge comes from staying interested in some of the longer stages. Global gladiators is a similar title with the same license and showed that it is possible to be g-rated and still have some teeth.

The graphics are slightly reminiscent of Sonic the Hedgehog in its use of specific tile sets in its backgrounds except with a Treasure touch. The game is far more reserved in its use of special effects and instead focuses more on good art and great animation. The vivid color palette defies the hardware much like Treasure’s other work. The bosses are the one area the artists went a little nuts as they are all multi-jointed and animated extremely well. The music on the other hand is forgettable. They certainly tried as the soundtrack is loud and a little catchy but nothing you’ll remember once the game is done.

Difficulty and length aside it was startling to see a licensed game crafted with such care. The fact that you could replace Ronald with any other character and the game would still be great says it all. Once you get over the McDonalds thing (which isn’t even all that present throughout) you are left with a good game that had potential to be even better.