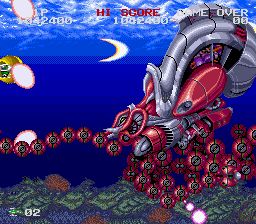 When the SNES first launched it was kind of funny to see all of the shooters released with crippling slowdown. Some of these were absolutely dire like Super R-Type and Gradius III despite still turning out pretty good. Meanwhile the less ambitious games within the genre turned out alright. Darius Twin is a forgotten relic of that early period for a number of reasons. While decent it is also forgettable as it simply lacks the excitement of the many superior titles around that time frame like U.N. Squadron and Space Megaforce.

Calling Darius Twin a console exclusive is only half correct. In truth the game lifts many of its elements from both Darius I & II. About half of the bosses and even stage themes and backgrounds come from those prior games. Calling this Darius Remix would have been more appropriate. Still it isn’t all recycled content and the new levels created for the game do give a glimpse of what could have been if this were a completely new game. The game desperately needed that spark as it is pretty bland overall. Darius was notable for 3 things: its branching paths, the triple monitor setup in the arcade, and the fish themed enemies. Take away the monitor setup and a half assed branching path system and you are left with a slow game where you shoot robot fish. Doesn’t sound very exciting does it?

At its heart the game is pretty simple with very few weapon upgrades and a slow pace. That wouldn’t be damning in itself but the slower pace leaves the game feeling incredibly boring. Despite the steady stream of enemies they don’t seem the slightest bit interested in your presence. The occasional mid-level boss will pose a threat but those are generally slightly bigger regular enemies. The game simply moves at its meandering pace and even the inclusion of coop fails to generate any excitement.

One of the most crucial features of any Darius title, the branching paths, is present here but is implemented so badly that it is insulting. There are far less levels, cut down from a robust 28 to a mere 12. The few choices available on the map are largely irrelevant as both stages are almost always a simple palette swap of each other. The one or two times they differ you’re facing the exact same enemies anyway. It not only cheapens this feature but severely cuts down on the replay value as well.

The Darius series is noted for its difficulty with this game being somewhat of an exception. Despite the fact that the enemies seem to lack any drive in seeking you out they take many hits before death and attack in large groups. The game does a good job of making sure you are almost always equipped with a shield of varying strength which helps but once it’s gone you’ll die in seconds. Once you’ve acquired some firepower however it is easy to breeze through the game as the bosses are the only ones that pose a threat.

A large part of the difficulty comes from the lacking weapons. Aside from the primary laser and shield your only other option is a four way laser that is nearly useless. Between both weapons it will take until the middle of the game before they are sufficiently powered up to a decent level to make any real difference. The game wisely lets you keep all weapons collected upon death unlike nearly every other shooter otherwise this would have been impossible otherwise. The addition of at least one or two other choices would have made significant impact on the game and relieved some of the boredom.

In terms of presentation the game is solid if a bit lazy. The fish themed adversaries are certainly unique although they do become repetitive in short order. The backgrounds are pretty lively and feature a decent amount of scrolling although some of these are lifted from prior games. Most importantly however there is no slowdown, which is a god damn miracle for a first generation SNES game. That is due in part to the game’s laid back pace than any technical wizardry however. The Zuntata soundtrack can be good at times but the synthesized music is not a good fit for the SNES and can be grating at times.

The Darius series relies on its few unique features to stand out in a crowded genre. Once those aspects are stripped away or implemented in a lesser form it exposes the generic game underneath. Darius Twin simply does not stand out among the SNES shooter lineup and is largely forgettable because of it.