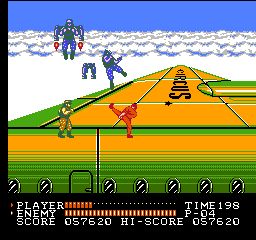 Looking back I have fond memories of Kung-Fu for NES. If you were there when the NES launched it was slim pickings for the first year so more than likely many played it and were done with it in an hour or so. At the time I was not aware it was not only an arcade port but also loosely based on the Jackie Chan movie Meals on Wheels. That last point is important as Kung-Fu received a Japan only sequel titled Spartan X2. I’m curious as to why no one picked it up for worldwide release; for God sake Master Chu and the Drunken Hu left China somehow! Anyway while Spartan X2 is improved in many categories it is simply above average when compared to many of the later brawlers released at the same time in 1991.

Like many Kung-Fu was one of the first NES games I ever played and while I might not have realized it back then its design had a huge impact on how I would approach games in general. Kung-Fu was a simple game but its use of enemies with different attacks, bosses with specific patterns and such was the first time I had ever encountered such design elements. The skills I built plowing through the game in record time have continued to serve me well in my gaming career (that sounds so corny.) as I can pick up on these elements in seconds in any game.

To an extent all of that still exists in Spartan X2 however it has been simplified even more. Thomas returns with all of his moves from the previous game with a few additions. By crouching you can build up a charge to unleash a mean uppercut that is strong enough to send even bosses flying back. The over the shoulder throw however is useless. It requires precise positioning and timing to execute and isn’t worth it when a simple kick or uppercut will suffice. Unfortunately there is little reason to use any other move than kicks as the brain dead enemies will simply rush you every time. Every now and again you’ll get some brave soul who will swing by on a chain but for the majority of the game this is what you’ll “deal” with. The subtlety of different enemy combinations is gone and with that the game is simply a mindless brawler.

Aside from the zombie like enemies the game is insanely easy. Your life bar is overly generous to an extent rarely seen in an action game let alone a side scrolling brawler. Getting hit or grabbed has little danger since you have so much health and you can get away with a lot of sloppy play. Part of what made Kung-Fu so challenging was the fact that if you screwed up and used the wrong attack on an enemy your life bar could be sapped in seconds. Prioritizing enemies played a large role as the knife throwing bastards or the midgets would get in cheap hits. Almost none of that is present as nearly every enemy walks into your fists in a straight line.

It isn’t until the latter half of the game that it picks up slightly. Here you’ll deal with soldiers that will attempt to tackle you, jet pack wielding bad asses, and even ninjas. They still go down in one hit but their placement and numbers might make you sweat. A little. The boss battles are just as easy as the rest of the game as it is pretty simple to trap them in the corner and wail away. That is with the exception of Murder Lin. This knife tossing bad ass was legitimately hard and almost made me slam my controller in frustration. I haven’t done that since the early 90s!

I have my issues with the gameplay but the game’s presentation has seen a considerable upgrade. Your adventure is no longer confined to a single pagoda but instead is a worldwide drug busting tour. The frequent change in scenery does wonders to keep you interested in progressing as there is a suitable amount of detail in the backgrounds. The sprites are smaller but are far more detailed and better animated with the only black mark being some slowdown in a few spots. Even the music is excellent but repetitive as there are only a few songs.

Spartan X2 is not a bad game but also is simply unremarkable. Like its predecessor it is very short and can be completed in less than 30 minutes. Unfortunately it also cannot fall back on the excuse that there isn’t anything else out on the market to warrant replaying it multiple times. I will say however that I enjoyed the brief time I spent with it. For those interested in its story there is a fan translation although you can probably guess the plot either way as it is pretty standard police stuff.