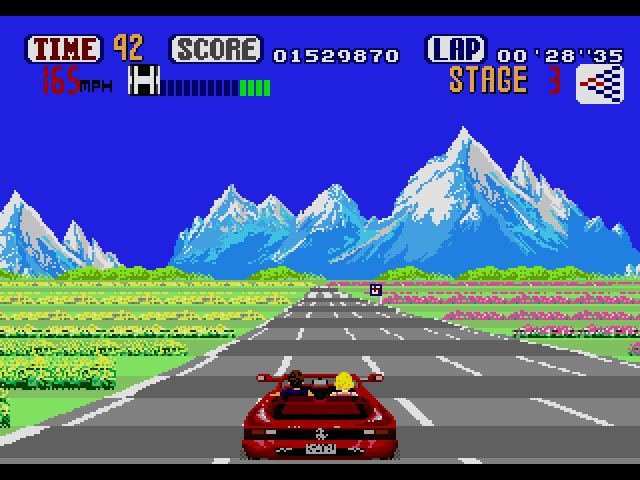 I love Outrun and it’s funny to track my history with the series as I came to it in a backwards fashion. The pretty good Master System conversion was my first exposure to it and while good my mind was blown upon seeing the arcade game. The ridiculous number of scaling sprites was practically a revelation. Upon learning about the Genesis version years later my expectations were tempered; games like Afterburner 2 and Hang-on (which used the same tech) turned out pretty bad. My trepidation was unwarranted however as Sega did a bang up job with this port. Obvious technical shortcomings aside you would be hard pressed to see a better job on this hardware.

Creator Yu Suzuki billed outrun as a driving game rather than a straight racer. The exotic locations and especially the Ferrari Testarossa help sell the idea that you are on a leisurely drive at nearly 200 mph with your lady in the passenger seat. It’s a lot like Rad Racer (well I guess it’s the other way around) except far cooler. The deluxe sit down cabinet replicated the interior of the vehicle complete with gear shift and force feedback and is a machine I count myself lucky to have experienced once or twice. The game was a significant leap forward in the genre thanks to its technology that helped sell the idea of hills and undulating tracks convincingly. There were many ports of Outrun for nearly every platform but the Genesis version for the longest time was the best money could buy. Although stripped down this is still a pretty damn good game and one that is still incredibly fun today.

The goal of the game isn’t to come first against a set number of competitors but to simply reach one of the five end goals before time runs out. There is no set route but instead a massive number of branching paths with set checkpoints in between that you can choose from as you go along. These branches correspond to an easy or hard path with a suitable amount of traffic and lurching turns to match. All told there are 15 tracks with a single game comprising five stages. The nonlinear nature of each run gives the game far more replay value than your average racing title and is part of what makes the game so fun. While challenging there are six difficulty levels which makes this extremely accommodating.

The course design is generally excellent with a great amount of trackside detail and enough wild turns that will really test your driving skills.   Outrun more so than any other racing game taught me the value of switching from high to low gear in order to better navigate turns. I was the type of guy who preferred to barrel into corners at top speed and just barely avoid crashing by mildly tapping the accelerator to avoid losing too much speed. That approach can work here but isn’t optimal, especially as the game is pretty ruthless when it comes to time. There is very little margin for error and once time runs out it is immediately game over. While soul crushing any given run takes about 20-30 minutes on average so it doesn’t feel too punishing. The game is so fun that more than likely you’ll be itching to jump back in for one more game!

Any home port of Outrun was going to suffer in translation however all things considered the Genesis version turned out better than expected. All of the crazy twists, turns, and hills from the arcade have been recreated in exacting detail. The numerous routes are all visually varied with some pretty unique settings that weren’t typical in games such as the Swiss Alps, rolling wheat fields, and even Stonehenge. While the look is faithful the scrolling is incredibly choppy in motion. The Super-Scaler tech Sega used at the time was pretty advanced so it is amazing that they were able to approximate the look at all. The choppiness is noticeable but not distracting; this conversion fared a lot better than Galaxy Force 2 and Super Thunder Blade in that regard.

You can’t talk about Outrun without mentioning its fantastic soundtrack. All 3 classic tunes (the dubiously named Magical Sound Shower, Splash Wave, and Passing Breeze) are here in their synthy glory with the genesis producing bass heavy renditions of each. There’s even an exclusive new track (Step on Beat) that is pretty good and fits in with the other three. The only negative in the sound department would be that the sound effects cut out at times which is distracting.

The Genesis version of Outrun is an amazing conversion of a legendary game, one of its better ports, and easily one of the best racing games for the system. While I would recommend Outrun Coast to Coast first to anyone interested in the series Sega did a spectacular job and the game is still worth owning today.