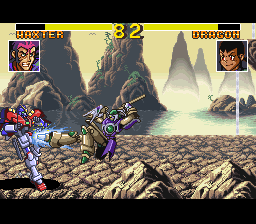 I have mixed feelings about the various Mobile Suit Gundam series but the one thing I can say for sure is that I hate Gundam Seed. And that I kind of like G-Gundam. G-Gundam absolutely embraces its stupidity and whether I actually like it or not I can at least respect that. The entire premise behind this particular edition of the series was definitely inspired by the fighting game craze (namely Street Fighter) so of course a game would accompany it. Yet despite its foundations Kidou Butoden G-Gundam is only a slightly above average fighting game and one that cannot hold your attention for long. This should have turned out so much better.

In the world of G-Gundam there is no war. Instead a tournament is held every four years called the Gundam Fight in which each nation sends there representative Gundam to compete for sovereignty over all countries until the next tournament. Clearly this setup was inspired by a certain series about fighting in the streets and plays out just like an animated version of that game, complete with over the top attacks and ridiculously stereotyped mechs from each country.

The very concept of G-Gundam is practically made for a fighting game so the fact that it turned out so tepid is disappointing. Part of what makes this so average isn’t that it borrows so much from Street Fighter but that it doesn’t execute on those elements as well. From its imprecise recognition of button inputs to its small roster this really should have turned out better. What content is present is decent but you’ll quickly end up going back to far superior fighting games in short order.

The roster is small but manages to include the most of the popular characters from the show. The characters are mostly substitutes for your favorite Street Fighter personalities, with the Dragon Gundam functioning as your Dhalsim stand-in and the Bolt Gundam playing like a slightly faster Zangief. You’ll be surprised to learn that main hero Domon does not in fact play like Ryu. However! The game has that niche covered with God Gundam, his alternate which fulfills that role. With that in mind Gundam Maxter and the Master Gundam are the Ken to its Ryu. The rest of the cast are more unique with the fast moving and awesome Gundam Spiegel being my favorite. I just wish there were more of them.

The roster is my largest issue with the game. There’s no getting around the fact that nearly all of the Mobile Suits representing the various countries are offensive and borderline racist, taking numerous stereotypes to the extreme. Gundam Maxter of the US is an amalgamation of various sports equipment and that’s a tame example, don’t get me started on the Tequila and Zebra Gundam. That being said they would have made excellent fodder for an expanded roster. Unfortunately the game has a paltry list of 10 with 4 of those being clones of each other. I realize clones save time and resources but this is a bit extreme. Christ there were well over 50 Gundams in the show they could have tossed in, how cheap can you be?

Despite the surface similarities to Capcom’s classic the fighting engine here doesn’t quite come together. Hit detection is all over the place with moves that clearly should not connect registering a hit while others have insane priority. Because your moves don’t flow together combos are nearly non-existent; you’ll be lucky to pull off a two-in-one at most. Many of the special moves look pretty cool but suffer from such short range that they are next to useless. The timing of your button inputs has to be near perfect for certain special moves to execute as well. Because of all these flaws the game plays more like a brawler which is ultimately unsatisfying.

In terms of presentation the game is in line with other similar games released in 1994. The Mobile Suits are larger than your average fighting game sprite with some decent animation. The show produced all manner of flashy special moves for each mech that have been faithfully recreated here. The backgrounds are incredibly detailed and go through a day time cycle with each round. Had the game been released a year before it would have been more impressive; by late 1994 the stellar ports of Super Street Fighter 2 and Mortal Kombat 2 were on the market, making this less notable in comparison.

Overall G-Gundam is decent for what it is but the fact that there isn’t as much content and that the SNES has so many better fighting games makes it a less than attractive proposition. The broken fighting engine means there isn’t much depth to the game and you’ll be done with it in just a few hours, if that. There are far too many better options to bother.